On a trip to Maine a few years ago I stopped briefly in Portsmouth, New Hampshire just across the river from Maine. I spent just enough time to know I wanted to return someday.  The city struck me as a northern Charleston with a core of many historic buildings. Since Charleston is one of my favorite cities, that says a lot.

Last month I finally made it back and decided to spend an afternoon at the city’s premiere history place, Strawbery Banke.  This outdoor history museum preserves a neighborhood called Puddle Dock, interpreting life from the 1690s to the 1950s. It features original buildings of all shapes and sizes: houses, a tavern, shops. Few, if any, outdoor history museums in America attempt to interpret such a broad sweep of history within the focus of one neighborhood.

Of the ten or so houses I visited, my favorite compared two time periods. The Shapley-Drisco house (c.1795) featured a fully furnished first floor, showing what it may have looked like during the stay of two families, one in the 1790s and the other in the 1950s. The right side of the house interpreted the family life of John and Carolyn Shapley, the first occupants of the house. John was a mariner who owned a boat for fishing and coastal trade. As part of a waterfront community, he also kept a shop to sell his neighbors a variety of goods. His middle class trading family represented an economy on the rise after the Revolution.

By the 1950s the neighborhood had changed radically. It had become a community of blue-collar immigrant families living in duplex housing. It was declared a slum and was slated for urban renewal.  The left side of the house on the first floor portrayed a family residence in the 1950s, TV turned on in the front living area and modern conveniences in the small back kitchen.

The house represents the story of a neighborhood and the many generations who called it home. With a little imagination, visitors to Strawbery Banke’s buildings learn about change over time. While no famous people lived here, it is one of America’s oldest continuously occupied neighborhoods. Early British settlers named the community for the wild berries growing there.

The house brought to mind an exhibition I worked on at the National Museum of American History. Within These Walls… (still on display) focuses on a house from Ipswich, Massachusetts and five different families who lived in the house over several centuries. It’s so fascinating to think about the many stories that one house can tell.

Sidebar: I love when I run into unexpected connections between places I’ve been. Strawbery Banke currently features a special exhibition about Major General Fitz John Porter, a Civil War soldier born in Portsmouth several blocks from the museum. I’d never heard of him before. I walked into the exhibition and was surprised to see a large photograph of Civil War balloonist Thaddeus Lowe and learn that Porter was a proponent of using balloons for aerial surveillance. He made frequent ascensions with Lowe and learned to handle the balloon alone. In 1862 he flew above Confederate lines. 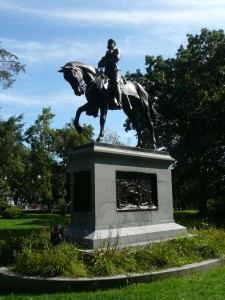 A statue to him stands several blocks from Strawbery Banke and portrays his connection with the balloons. 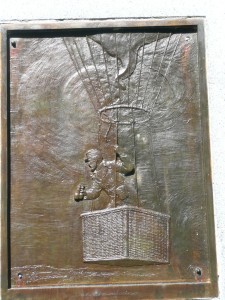 Check out my blog post about Thaddeus Lowe on the National Mall.

Have you been to Strawbery Banke? or Portsmouth? Tell about your experience.

Author, public historian, and consultant. Author site: timgrove.net - My fifth book, Star Spangled: The Story of a Flag, a Battle, and the American Anthem, was published in May 2020. Consulting site: grovehistoryconsulting.com I specialize in exhibition development, interpretive planning, education strategy, and history relevance. I'm passionate about helping history organizations of all sizes and kinds make history more relevant for their communities and the people they engage with. I'm happy to consider many types of writing projects for informal learning organizations. Reach me at tim@grovehistoryconsulting.com or authortimgrove@gmail.com
View all posts by Tim →
This entry was posted in 18th century, 19th century, 20th century, city/town, Civil War, house, military and tagged NH, strawbery banke museum. Bookmark the permalink.