If you asked most people to name the crown jewel of American history places, they would probably, maybe, hopefully say Independence Hall in Philadelphia. After all, the nation’s most important documents, the Declaration of Independence and the Constitution, were debated and signed there. The very ideas of American government were uttered from the founding fathers’ lips and bounced off the walls in this building.  So, it’s hard to argue for a more historic building in the U.S.

A few months ago I decided to tour the building again. I hadn’t visited in many years and wanted to see if the tour had changed. Free timed tickets are required and the effects of post 9/11 security are evident everywhere, to varying degrees of subtlety. I arrived at the meeting point early so was able to join an earlier tour. This turned out to be a mistake because my guide was terrible. He was a volunteer and assumed too much foundational knowledge from the international audience. He launched into a history lecture. I left the tour when able, and joined the next tour, led by an excellent park ranger who enthralled his audience.

The power of place is palpable in the building, but interpretation is a challenge. It is a government building, after all, and is furnished for that function, with little decoration. The main story is ideas rather than personalities. The Assembly Room is the hallowed room where George Washington was appointed Commander-in-Chief of the Continental Army, where the Declaration of Independence was adopted, where the Articles of Confederation were adopted and where the Constitution was drafted. 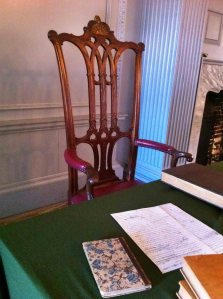 Every tour I can ever remember of this room also points out the famous “rising sun” chair, an original piece. James Madison’s journal from the constitutional convention tells the story. “Whilst the last members were signing [the Constitution], Doctor Franklin, looking towards the President’s chair, at the back of which a rising sun happened to be painted, observed to a few members near him, that painters had found it difficult to distinguish in their art, a rising, from a setting, sun. I have, said he, often and often, in the course of the session, and the vicissitudes of my hopes and fears as to its issue, looked at that behind the President, without being able to tell whether it was rising or setting; but now at length, I have the happiness to know, that it is a rising, and not a setting sun. ”

The tour features three rooms, with access to two additional rooms on view upstairs. What I really wanted to do was climb the narrow steps to the bell tower. Alas, this is clearly off-limits to visitors. The Liberty Bell, the famous bell from that tower, in enshrined in an adjacent building.

One can hardly visit Independence Hall without feeling a certain sense of awe. Tours are filled with people from all across the world, drawn to this place where a nation began. Yet, the challenge of interpretation remains. What is the best way to convey the ideals that were debated, the compromises made, the fears and injustices attacked? The nearby National Constitution Center strives to do just that and is a noble addition to the neighborhood in recent years. But history here is less tangible, perhaps more lofty, than at most other sites. The best park rangers know that visitors want to soak in the scene rather than have facts crammed down their throat.

Independence National Historical Park includes other sites as well, the Liberty Bell, the new President’s House site (read my previous post about that), the Portrait Gallery in the Second Bank of the United States, Franklin Court (focus on Benjamin Franklin’s life), and Carpenter’s Hall. Most of them are worth a visitor’s time. I was fortunate to have parents who recognized the value in taking me to see this place in my youth. While sadly, the site is underfunded and gets buffeted by the winds of politics every so often, it’s still a historic site that should be at the top of every American’s must-see list.

Have you visited Independence Hall? What did you think?

Author, public historian, and consultant. Author site: timgrove.net - My fifth book, Star Spangled: The Story of a Flag, a Battle, and the American Anthem, was published in May 2020. Consulting site: grovehistoryconsulting.com I specialize in exhibition development, interpretive planning, education strategy, and history relevance. I'm passionate about helping history organizations of all sizes and kinds make history more relevant for their communities and the people they engage with. I'm happy to consider many types of writing projects for informal learning organizations. Reach me at tim@grovehistoryconsulting.com or authortimgrove@gmail.com
View all posts by Tim →
This entry was posted in 18th century, American Revolution, national park and tagged George Washington, Independence Hall, national park, PA. Bookmark the permalink.