Downton Abbey reminds me of somewhere

I read an interesting blog post from the National Trust for Historic Preservation about the role of place in popular television. The main example was Downton Abbey, the popular series on PBS.  The blogger talked about how the show features the house as a main character, the unshakable foundation of a world in transition. It is home to generations of Crawleys, a family steeped in tradition .  The show is so stunning and real, in part, because many scenes are filmed on location at Highclere Castle in Hampshire.

While the story and characters are all fictional, it is the pervasive sense of place that is so compelling for me. Every time I watch the show, I think of a house I visited several years ago in Cornwall, Lanhydrock House on the River Fowey. 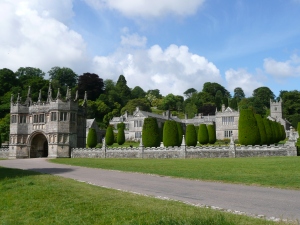 I’ve visited many other English castles and great houses, but rarely have they been such a good example of Victorian segregation.  The time period interepreted at Lanhydrock emphasized the late nineteenth and early twentieth centuries and the division of class and gender was starkly demonstrated on the house tour.  A family named Robartes had owned the estate since the early 1600s. The family was hit by unexpected tragedy when a fire destroyed a large portion of the house in 1881. Within a year both Lord and Lady Robartes were dead. It was up to the heir to rebuild and modernize the house and expand it to the codes and conveniences of the late Victorian period.  The new house plan followed the principle of segregation and a maze of separate corridors and staircases helped ensure that genders, ages and classes would not meet at the wrong moment. 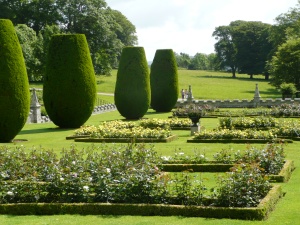 Like at Downton, World War I drastically altered life at Lanhydrock.  Heir Tommy Agar-Robertes was shot while trying to rescue a wounded comrade during the Battle of Loos and died. Two of his brothers also served during the war and were wounded and never quite recovered. Today the house is owned by the National Trust and is well worth a visit.

The blog post made me think about other TV series I’ve seen that featured history places. The miniseries North and South in the 1980s swept me and many others into the American Civil War period. Mont Royal was the home of the fictional Main family of South Carolina and the series was filmed on location at Boone Hall 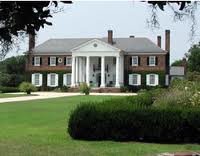 plantation outside of Charleston.  I remember my excitement at visiting Boone Hall for the first time and feeling like I knew the place. Orry Main and his family had ridden up the live oak drive so many times on the show. The house is open to the public and the estate has a fascinating history as a cotton plantation. It remains a working farm.

I can only assume that visitation to these historic properties increases when they are featured in popular media. No doubt Highclere Castle has been added to the list of places to see in England for many tourists. I hope that the staff at these properties will see this as a teaching opportunity and delve into the reality behind the fiction.

There are many examples in TV where place becomes a key element of the story. What are some others? Have you visited a historic property famous as a fictional location? Tell about it.

Author, public historian, and consultant. Author site: timgrove.net - My fifth book, Star Spangled: The Story of a Flag, a Battle, and the American Anthem, was published in May 2020. Consulting site: grovehistoryconsulting.com I specialize in exhibition development, interpretive planning, education strategy, and history relevance. I'm passionate about helping history organizations of all sizes and kinds make history more relevant for their communities and the people they engage with. I'm happy to consider many types of writing projects for informal learning organizations. Reach me at tim@grovehistoryconsulting.com or authortimgrove@gmail.com
View all posts by Tim →
This entry was posted in 19th century, 20th century, house, International and tagged Boone Hall, Downton Abbey, English great houses, North and South, SC, UK. Bookmark the permalink.