The President and his mules

Nope, not President Harry Truman, who said “My favorite animal is the mule. He has more horse sense than a horse.” You may be surprised which president. 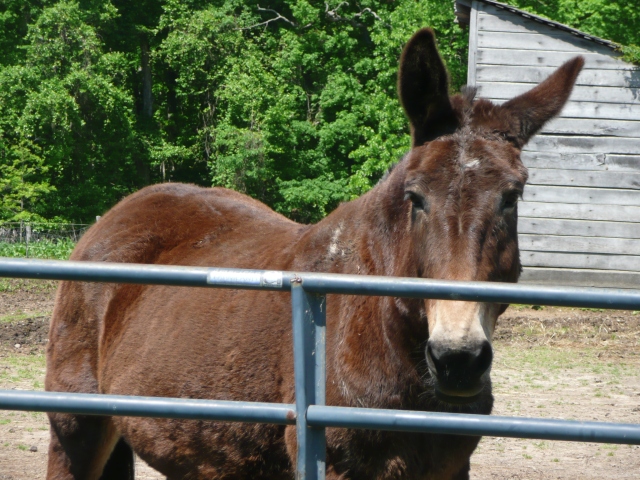 Last spring I was doing some research about the history of mules in America. One person who strongly advocated for the use of mules was America’s first President. Besides his role as founding father, George Washington was an avid mule breeder and receives credit for introducing mules to American agriculture and promoting their use throughout the South. In the 1700s the Spanish were using mules in various capacities and had sent mules to their missions in western North America. Not long after the Revolutionary War, Washington, an avid farmer, decided to experiment with mules.  He set out to import an Andalusian donkey from Spain, but the country restricted exports. [Mules are the offspring of a female horse and male donkey]The King of Spain somehow heard of Washington’s wish and came to the rescue.  He packed up two donkeys and shipped them to America. Only one survived the trip and ended up in Boston by mistake. Washington sent for the donkey with directions to his staff to treat the animal with great care. The huge donkey, named Royal Gift, finally arrived at Mount Vernon and stood over 15 hands high (that’s about five feet just to the top of the withers). At first Royal Gift did not show any romantic interest in Washington’s stable of horses, but eventually he decided that the Virginia mares were not so bad and Mount Vernon witnessed the birth of a mule.

In 1786 the French general the Marquis de Lafayette  heard about his American friend’s interest in mules and surprised him by sending him a jack, a male donkey, who arrived at the port of Baltimore from the Island of Malta.  Named the “Knight of Malta” the donkey also did his job and increased Mount Vernon’s mule population. Livestock inventories at Mount Vernon show a swift shift from horses to mules during the years that Washington was President. In 1785 the inventory listed 130 horses and no mules, and by 1799 it listed 58 mules and 25 horses.

Washington quickly became convinced that mules would transform American agriculture. In comparison to horses, mules endured heat better, required less quality feed, fought less in large groups and were generally healthier.  He wrote to Arthur Young in 1788, “I have the prospect of introducing into this country a very excellent race of animals… from these I hope to secure a race of extraordinary goodness, which will stock the country.” And he wasted no time in his efforts to stock the country. Farmer Washington sent poor (or lucky) Royal Gift on a stud tour throughout the South where Washington happily arranged breeding and displayed him at agricultural shows.  He even encouraged his friend Thomas Jefferson to try mules and Jefferson came to favor them. 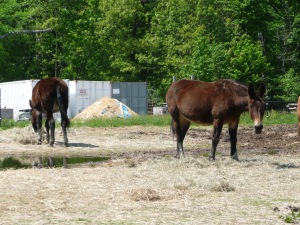 Washington’s restored estate today includes a working farm site with animals and is able to show visitors the real thing. I decided to visit the estate’s two mules.

When I arrived, Lisa Pregent, the livestock manager, was busy trying to coax two escaped oxen back to their fenced pasture. The oxen shared a pasture with eight or so large horses and Moose, one very large Mammoth donkey. Lisa took me to the adjacent field and 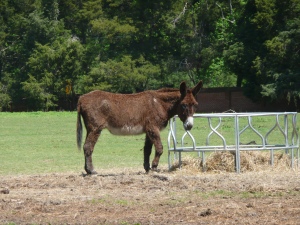 introduced me to James and Clem (also called Kate and Kit behind-the-scenes). Kentucky-born, the mules take visitors for wagon rides and help with the plowing and harrowing at the farm site. They endure hours of continuous petting from visitors and only go out in public every couple days.  On their days off they graze on succulent grasses under the azure Virginia sky.  Such is the life of a Mount Vernon mule charged with helping to tell the story of George Washington’s fascination with mules to a million visitors each year.

Check other posts about Mount Vernon:

Author, public historian, and consultant. Author site: timgrove.net - My fifth book, Star Spangled: The Story of a Flag, a Battle, and the American Anthem, was published in May 2020. Consulting site: grovehistoryconsulting.com I specialize in exhibition development, interpretive planning, education strategy, and history relevance. I'm passionate about helping history organizations of all sizes and kinds make history more relevant for their communities and the people they engage with. I'm happy to consider many types of writing projects for informal learning organizations. Reach me at tim@grovehistoryconsulting.com or authortimgrove@gmail.com
View all posts by Tim →
This entry was posted in 18th century, agricultural, President and tagged George Washington, mules, VA. Bookmark the permalink.

5 Responses to The President and his mules