The trial of the century? 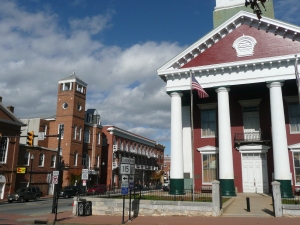 Charles Town, West Virginia sits a few miles from Harpers Ferry in rolling countryside, not far from the Virginia border. It’s the county seat of Jefferson County and its history goes back to 1786 when George Washington’s youngest brother, Charles, donated four corner lots for the town’s public buildings. He had moved his family west of the Blue Ridge mountains and settled in the area in 1780. Charles was involved in laying out the town’s streets and named many of them for his brothers. And yes, his famous brother came to visit on occasion.

In the fall of 1859 , the town (then in Virginia) was featured on the front pages of newspapers nationwide. In October abolitionist John Brown and a band of men had raided the nearby federal arsenal at Harpers Ferry and had attempted to arm slaves and start a revolt. He was captured under the command of then Colonel Robert E. Lee and negotiations had taken place between Brown and Lt. JEB Stuart. Lee wrote later that he thought Brown was insane – a fanatic or a madman.

The subsequent trial was held in the Charles Town courthouse from Oct. 26-31. Brown was found guilty of murder, inciting slaves to rebel and treason against the state of Virginia and sentenced to be hung December 2. That day he had written a final prophetic statement:

“I John Brown am now quite certain that the crimes of this guilty land will never be purged away but with Blood. I had as I now think vainly flattered myself that without very much bloodshed it might be done.”

He rode to the gallows in a field near the center of Charles Town sitting on his coffin. Among the crowd that gathered to watch the spectacle was John Wilkes Booth, future murderer of President Abraham Lincoln.

This singularly compelling portrait of Brown, in the collection of the National Portrait Gallery, depicts an older white man with fiery blue eyes and a wildly uncontrolled head of gray hair. His sharp nose sits atop a flowing white mustache and beard. A white shirt collar is visible around his neck, his body is wrapped in a gray wool blanket. The intensity of his gaze reflects a jumble of emotions. I’m guessing most Americans would not recognize either his image or his name. Historians have debated his role in America’s past—perhaps he is the ultimate American provocateur. Some historians give him credit for lighting the final spark that brought about the conflagration of the Civil War. Labeled a villain, terrorist, madman, martyr and saint, John Brown remains a controversial figure in history.

The picture is one of my favorites due to its passion and starkness. The viewer cannot fail to wonder who this person was and what cause drove his soul. His colorful life ended in a dark thunder cloud of tension on the gallows at Charles Town and his legacy represents the power of one person to make history. 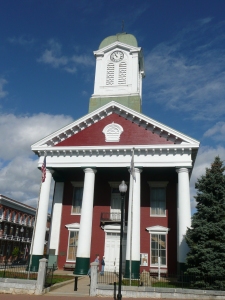 Brown’s trial was held in the Court House that remains in use today. The Doric temple in Greek revival style was built in 1836. Part of the John Brown courtroom still survives and is open to the public when not in use. The building stands as a stark reminder to the emotionally charged event which turned a seeming madman into a martyr. 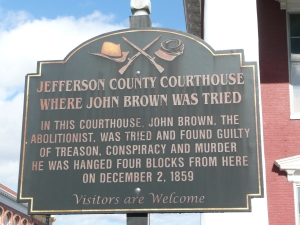 Author, public historian, and consultant. Author site: timgrove.net - My fifth book, Star Spangled: The Story of a Flag, a Battle, and the American Anthem, was published in May 2020. Consulting site: grovehistoryconsulting.com I specialize in exhibition development, interpretive planning, education strategy, and history relevance. I'm passionate about helping history organizations of all sizes and kinds make history more relevant for their communities and the people they engage with. I'm happy to consider many types of writing projects for informal learning organizations. Reach me at tim@grovehistoryconsulting.com or authortimgrove@gmail.com
View all posts by Tim →
This entry was posted in 18th century, 19th century, city/town, Civil War and tagged courthouse, Harpers Ferry, John Brown, WV. Bookmark the permalink.