It’s Thanksgiving in America and our thoughts turn to Pilgrims and the first Thanksgiving in Plymouth, or Virginia or wherever it really happened. I think Virginia and Massachusetts are still arguing that one. In any case, I visited Plymouth, Massachusetts last June and went to the sites. I must admit that my visit to Plymouth Rock, that icon of American history, was a strange experience. I’d been there as a child, so had foggy memories of looking down at a rock under an elaborate outdoor structure. So as an adult I watched people approach the grand Roman Doric portico that protects the rock. 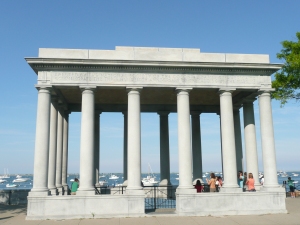 There was a mixture of silent awe and kind of mock wonder. Wonder that there is so much fuss surrounding a rock that probably no historian recognizes as an authenticate piece of history. I supposed it’s the symbolism that bears the meaning. Its story is told on a interpretive panel next to it and given authenticity by the fact that it was erected by the Dept. of Conservation and Recreation for the Commonwealth of Massachusetts. The rock was identified as the rock which received the first Pilgrim step onto the New World – in 1741 (only one hundred twenty-one years after the landing), by a 94 year-old man who had been told by several original Pilgrims, that this was THE rock. Today’s rock, engraved with the date 1620, is supposedly only a third of its original size. Like any relic, pieces were chipped off over the years and some even reside in the Smithsonian. The whole story seems absurd to my historian’s sensibilities, but I suppose it’s really about the idea of what the rock represents. OK, I still don’t get it. 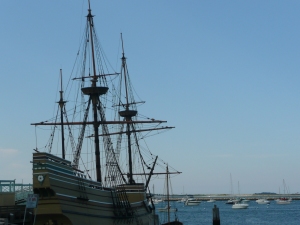 Then there’s the replica of the Mayflower II floating nearby, a speculative vision of what the ship that transported the Pilgrims across the Ocean may have looked like. Unfortunately it had just closed so I wasn’t able to go aboard.

What captivated my interest the most that afternoon, besides Plimoth Plantation and the Wampanoag Village, was the National Monument to the Forefathers, a massive granite monument up the hill from the Rock and the ship. Dedicated in 1889, the huge figure rising in the middle is “Faith,” right hand pointing to Heaven and left hand holding the Bible. 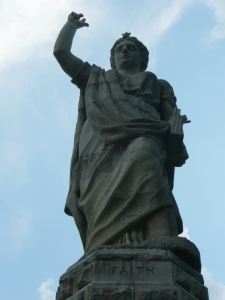 She looks out at Plymouth harbor, surrounded by four figures representative of the Pilgrim ideals and the foundational values of the United States: Liberty, Morality, Law and Education. The front panel reads: “National Monument to the Forefathers. Erected by a grateful people in remembrance of their labors, sacrifices and sufferings for the cause of civil and religious liberty.”  Panels on either side of the monument list the names of those who came over in the Mayflower. The rear panel contains a quote from Governor William Bradford’s famous history of Plymouth.

“Thus out of small beginnings greater things have been produced by His hand that made all things of nothing and gives being to all things that are; and as one small candle may light a thousand, so the light here kindled hath shone unto many, yea in some sort to our whole nation; let the glorious name of Jehovah have all praise.”

Our culture in this day and age just doesn’t produce monuments like this anymore. It speaks to the ideals of a time period and has a lot to say to us today. Whether or not you agree with its message, it provokes thought about America’s origins and its ideals.

Read my post about Plimoth Plantation and the Wampanoag Village https://historyplaces.wordpress.com/2012/08/10/pilgrims-and-wampanoags/

Author, public historian, and consultant. Author site: timgrove.net - My fifth book, Star Spangled: The Story of a Flag, a Battle, and the American Anthem, will be published in early 2020. Consulting site: grovehistoryconsulting.com I specialize in exhibition development, interpretive planning, education strategy, and history relevance. I'm passionate about helping history organizations of all sizes and kinds make history more relevant for their communities and the people they engage with. I'm happy to consider many types of writing projects for informal learning organizations. Reach me at tim@grovehistoryconsulting.com or authortimgrove@gmail.com
View all posts by Tim →
This entry was posted in 17th century, 19th century, art and culture, city/town, religion and tagged forefathers monument, MA, mayflower, Pilgrims, plymouth rock. Bookmark the permalink.

1 Response to Conflicting thoughts about Plymouth