I just returned from Boston and once again enjoyed walking miles through the neighborhoods. It is truly one of America’s great walkable cities. I took a guided walking tour of historic Beacon Hill and no surprise, ended up on the Freedom Trail, the famous red line that guides tourists to the major sites of revolutionary Boston. Here are three favorite Boston history haunts. 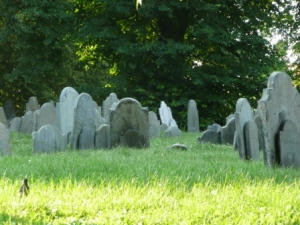 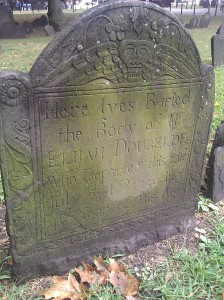 1) Cemeteries. There’s something about colonial cemeteries that fascinates me. Maybe it’s the old stones bending in myriad directions or the interesting names like Patience and Silence inscribed on them. Or it could be their designs, death’s head with skeleton and wings or winged  cherubs. The Granary Burying Ground dates to 1660 and is the third oldest cemetery in the city. Standing in the shadow of Park Street Church, it holds the remains of a who’s who of revolutionary Boston – John Hancock, Paul Revere and Samuel 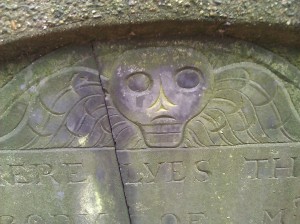 Adams, the victims of the Boston Massacre, and others such as the first African American poet Phillis Wheatley, Mary Goose (Mother Goose), and Benjamin Franklin’s parents. My favorite Boston cemetery is Copp’s Hill Burying Ground,

located near another church, the Old North Church. Copp’s is a year older than Granary and its oldest stone dates to 1661. In also includes the graves of two people born in the 1500s. Puritan ministers Increase and Cotton Mather rest here, as does Prince Hall, considered the founder of black freemasonry in the United States. 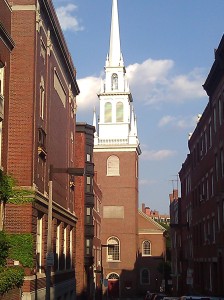 that most Americans know meant two lanterns hanging in the church tower to send a message that the British soldiers were on the move in 1775 across the Charles River, an action which some consider to be the beginning of the American Revolution. Most people don’t know this act of communication meant someone climbing eight stories to hang lanterns for just a few minutes, ensuring that the British didn’t notice. The 1723 church boasts a 175 foot tall steeple (which has 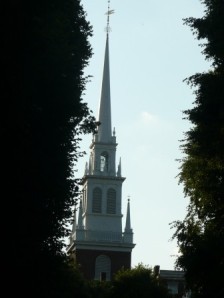 blown over twice in hurricanes), change ringing bells cast in England in 1744, and original high wooden box pews. Charles Wesley, co-founder of Methodism, preached there in 1736. The place is full of great stories. British Major John Pitcairn, who led troops to Lexington and Concord, was killed at the battle of Bunker Hill on the other side of the river from the church. He was buried in the crypt at the church. His body was supposed to be shipped back to Westminster Abbey, but 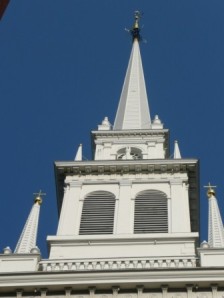 the wrong body was sent. General Lafayette visited and remarked that the bust of George Washington on display was the best likeness of his friend he’s ever seen. President Ford gave a nationally televised speech from the church during America’s bicentennial, and even Queen Elizabeth II showed up for a service during the anniversary.

3) Faneuil Hall. Sitting at the heart of the Freedom Trail, this meeting hall has been in existence since 1742. It served as Boston’s first town hall, and is named for one of the city’s wealthiest early 18th century merchants, Peter Faneuil. The building’s lower level was divided into market stalls, and a large meeting room on the second level has been a public forum for 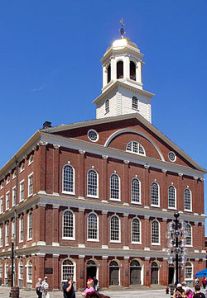 debates about many issues over the years. The building was expanded by Boston architect Charles Bulfinch and the current meeting room dates to 1805. From abolitionists William Lloyd Garrison, Wendell Phillips and Frederick Douglass, to temperance and suffragists such as Susan B. Anthony, the space has served as a stage for many famous Americans and has been called the “cradle of liberty.” During my visit, National Park Service staff ran a participatory program where the audience took on roles of Boston citizens in 1770 after the Boston massacre and debated what to do with the British troops. 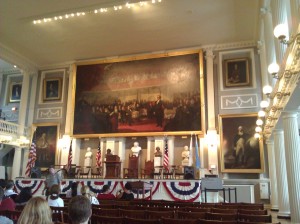 From my perspective, a walk on the Freedom Trail is mandatory for any history geek visiting Boston.

Walking in a Victorian Gentleman’s Shoes

Author, public historian, and consultant. Author site: timgrove.net - My fifth book, Star Spangled: The Story of a Flag, a Battle, and the American Anthem, was published in May 2020. Consulting site: grovehistoryconsulting.com I specialize in exhibition development, interpretive planning, education strategy, and history relevance. I'm passionate about helping history organizations of all sizes and kinds make history more relevant for their communities and the people they engage with. I'm happy to consider many types of writing projects for informal learning organizations. Reach me at tim@grovehistoryconsulting.com or authortimgrove@gmail.com
View all posts by Tim →
This entry was posted in 17th century, 18th century, 19th century, American Revolution, art and culture, cemetery/grave, national park, religion and tagged American Revolution, Boston, cemetery, MA, Old North Church. Bookmark the permalink.