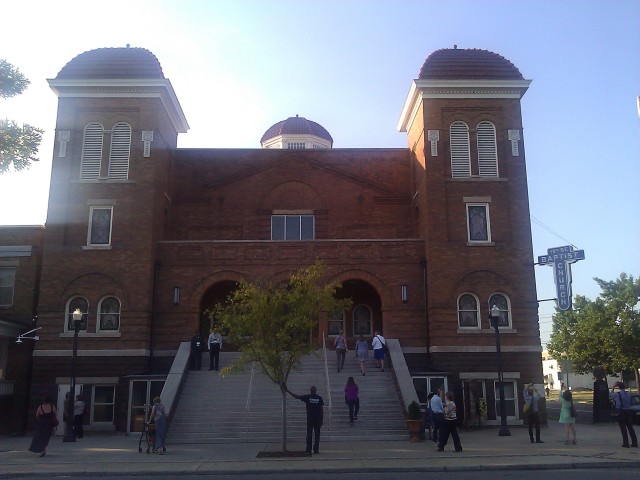 I felt history in a powerful way last week. Surrounded by my history colleagues from around the nation, I had the great fortune to visit 16th Street Baptist Church in Birmingham, Alabama, the historic African American church where 50 years ago a bomb set by the KKK rocked the building. Four young girls died and the event later was identified as a turning point of the civil rights movement. The program was part of the American Association for State and Local History annual conference. Our speaker was

Carolyn McKinstry, who was in the church during the bombing. She answered the phone and heard a voice give a warning and then an explosion rocked the church. She raced home, and only later learned that four of her friends had been killed. Ms. McKinstry had participated in mass meetings and marches across the street in Kelly Ingram Park and had felt the pain of fire hoses blasting water onto her skin. She spoke with clarity and purpose and believes that God spared her life on Sept. 15, 1963 so that she could tell her story and impact others for good.

My colleagues and I sat engrossed, aware of this unique opportunity

– we sat where history happened and heard a witness of the past, telling her story of survival and transformation.

A large plaque on the outside wall of the building indicates the spot where the bomb exploded. The fellowship hall in the basement includes a room set aside to honor the memories of those killed and to recall the tragic event. It is filled with photos and a clock that was in the sanctuary that day, stopped at 10:22 a.m.

Diagonal across the intersection is Kelly Ingram Park, a central staging ground for mass meetings and demonstrations in the early 1960s. Named for a local firefighter who was the first American sailor killed in World War I, the park is filled with sculptures that depict the horror and inspiration of the civil rights struggle. Statues of Martin Luther King, Jr., the four girls killed in the bombing, jailed children, and vicious police dogs combine to tell the story.

The sun had set by the time we emerged from the church and walked to the park. The silence betrayed the chaos that would have filled the air that day 50 years ago. The park has been witness to bravery and terror and hatred. I found myself wanting more… to know more about what motivates people to do what they do. 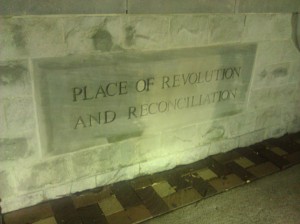 Read the story as initially reported by the Washington Post.

Author, public historian, and consultant. Author site: timgrove.net - My fifth book, Star Spangled: The Story of a Flag, a Battle, and the American Anthem, was published in May 2020. Consulting site: grovehistoryconsulting.com I specialize in exhibition development, interpretive planning, education strategy, and history relevance. I'm passionate about helping history organizations of all sizes and kinds make history more relevant for their communities and the people they engage with. I'm happy to consider many types of writing projects for informal learning organizations. Reach me at tim@grovehistoryconsulting.com or authortimgrove@gmail.com
View all posts by Tim →
This entry was posted in 20th century, civil rights, religion and tagged AL, birmingham, civil rights. Bookmark the permalink.