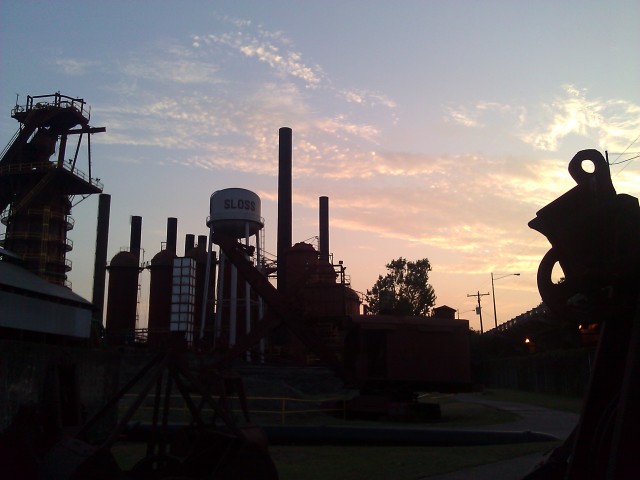 I’ve visited a lot of historic sites in the world and while they’re each unique in their own way, I love it when I find the rare place that is unlike all of the others. Recently I had the opportunity to visit Sloss Furnace in Birmingham, Alabama, a site truly unlike most places I’ve been. This National Historic Landmark, owned by the city of Birmingham, claims it’s the only blast furnace in the United States preserved for public use. The complex’s blast furnaces produced pig iron from

Many of the buildings on the site have been stabilized and are used for various community and civic events including concerts and festivals and an innovative metal arts program.

I visited one late summer evening at dusk, as part of an evening

event related to a conference of history professionals. I knew little about the site and attempted to read the interpretive markers on the way to the barbecue meal waiting for me. As we ate, the light faded and it was dark by the time I was ready to explore. I’ve learned that if you wait to eat later, the food is gone.

Admittedly, industrial sites are not my first interest and I know next to nothing about blast furnaces. A tour would have enlightened me, but no tours were available. Since it was dark out, most of the interpretive markers were in shadows; my education would need to be sensory. I was planning to wander through the site wearing my historian hat. But during the meal, my colleagues eagerly talked of their plans. They knew that the place is known to be haunted and had seen it on the TV show Ghost Hunters. Their mission was to hunt ghosts and they invited me to join them. I thought, why not?

So that evening, about four of my history colleagues went on an adventure. I hadn’t brought a flashlight, but my cell phone worked fine. We walked into dark rooms and tunnels, up ramps, over catwalks and bridges and sluices with trickling water, along musty walls, under huge spider webs and past lots of towering rusty pieces of machinery. Sure, I 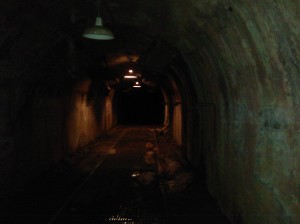 wanted to know what everything was, but the atmosphere entranced me. I felt like a kid again. Every now and then we walked into a room with a skeleton sitting there to greet us. I quickly learned that at Halloween the site hosts a very popular ghost tour and attraction called Sloss Fright Furnace. The event was coming up and staff was getting ready. I searched for the ghosts of workers past and had a grand adventure that night, thanks to my ghost-loving friends. For the record, we did not see any ghosts, probably because we were having too much fun.

Another sight to see: Birmingham was an industrial center in the South after the Civil War and its main industries included iron and steel production and railroad components. It was sometimes called the Pittsburgh of the South. A highly visible symbol of the city is the 56-ft. tall cast iron statue of the Roman god Vulcan, god of fire and forge, standing on a 126 ft. high pedestal in Vulcan Park overlooking the city.

Read my post about a much different Birmingham site.

Author, public historian, and consultant. Author site: timgrove.net - My fifth book, Star Spangled: The Story of a Flag, a Battle, and the American Anthem, will be published in early 2020. Consulting site: grovehistoryconsulting.com I specialize in exhibition development, interpretive planning, education strategy, and history relevance. I'm passionate about helping history organizations of all sizes and kinds make history more relevant for their communities and the people they engage with. I'm happy to consider many types of writing projects for informal learning organizations. Reach me at tim@grovehistoryconsulting.com or authortimgrove@gmail.com
View all posts by Tim →
This entry was posted in 20th century, industry and tagged AL, ghosts, industry, Sloss Furnace. Bookmark the permalink.