Most Americans don’t associate the state of Vermont with the American Revolution (the most likely state candidates are Massachusetts and Pennsylvania). Except Vermonters. They celebrate a legal holiday every year on August 16 – Bennington Battle Day – to commemorate a battle which took place in New York, though Bennington is in Vermont. Confused? Oh, and Vermont was not even a state until 1791.

Anyway, I ended up in Bennington, Vermont on a hot day this past July and had some time to kill. So, of course I was drawn to the obvious history site in town, the 306 -foot tall Bennington Battle Monument, the tallest structure in the state. My dad and I rode a rickety elevator up to the observation level at 200 feet. We wanted to get the lay of the surrounding land and enjoy a three-state view (New York, Massachusetts and Vermont). Plus we were hoping to find some cooler air, Vermont is not supposed to be hot and humid.

marks the location of the town’s ammunition stores in 1777. Two well-trained units of the British army under command of General John Burgoyne were headed from New York state to Bennington to capture the arsenal depot and gain some much-needed supplies. Burgoyne was alarmed by the fervor of the locals and had written to his superior that this country “abounds in the most active and most rebellious race on the continent…”

The Colonial forces, mostly untrained volunteers from Vermont, Massachusetts and New York, followed their commander, retired Continental Army Colonel John Stark – given the rank of Brigadier General for this effort. Stark decided that rather to take a defensive position in Bennington, he would meet the British before they reached the town. Supposedly he uttered the noble words “There are the Red Coats; they will be ours or tonight Molly Stark sleeps a widow.” Fighting began at 3 p.m. and the British were retreating by 5 p.m. Then a second unit of the British army appeared and the Americans began to lose ground. Then the action changed again when Colonel Seth Warner and his Green Mountain Boys arrived from Manchester and the Americans gained momentum and forced a British retreat and saved the day. 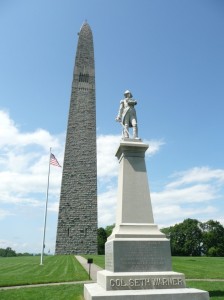 Burgoyne’s attempt to cut New England off from the other colonies failed. The battle of Bennington was considered a key precursor to the battles of Saratoga which led to Burgoyne’s surrender of 8000 troops on October 17. This surrender is considered a turning point in the American Revolution because it led to France’s alliance with America and ultimately French involvement in the War.

The monument includes a very small and sadly outdated exhibit area in its base. It is owned by the Vermont Division for Historic Preservation.

Just down the road from the monument stands the Old First Church, the first Protestant church in Vermont. The building dates to 1806. The nearby cemetery, designated “Vermont’s sacred acre” by the Vermont legislature, holds the grave of poet Robert Frost and approximately 75 Revolutionary War patriots, as well as some British and Hessian soldiers killed in the battle.

Author, public historian, and consultant. Author site: timgrove.net - My fifth book, Star Spangled: The Story of a Flag, a Battle, and the American Anthem, was published in May 2020. Consulting site: grovehistoryconsulting.com I specialize in exhibition development, interpretive planning, education strategy, and history relevance. I'm passionate about helping history organizations of all sizes and kinds make history more relevant for their communities and the people they engage with. I'm happy to consider many types of writing projects for informal learning organizations. Reach me at tim@grovehistoryconsulting.com or authortimgrove@gmail.com
View all posts by Tim →
This entry was posted in 18th century, American Revolution, cemetery/grave, military and tagged Bennington, monument, VT. Bookmark the permalink.