The house in the cemetery 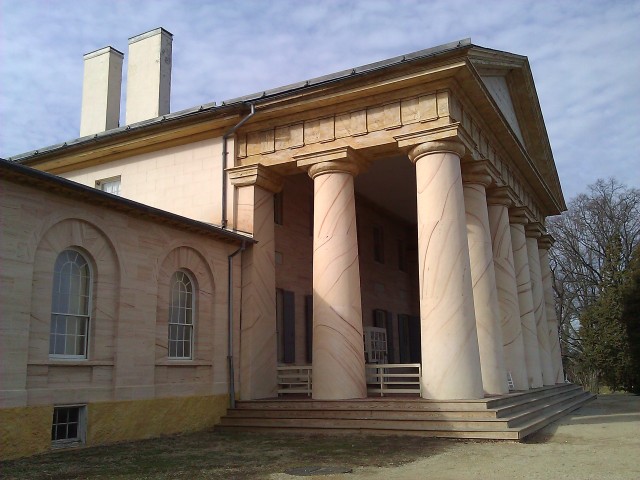 Just across the Potomac River from Washington, D.C. sits a columned house looking like a Greek temple with a commanding view of the city.  Down the steep hill outside its front door flickers the eternal flame at President John F. Kennedy’s grave. Surrounding the house on hundreds of acres of rolling hills are thousands of graves of America’s fallen heroes. This scene of domestic tranquility appears incongruous. Who would build a house in Arlington National Cemetery?

Ah, but the house came first, of course, 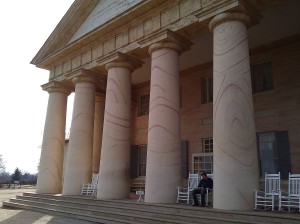 and the cemetery was a punishment of sorts. It’s famous resident chose the losing side in the Civil War. The house is Arlington House, the man, Confederate General Robert E. Lee. Here in this very house he agonized over his decision to resign his commission in the United States army and accept the offer to join his native state of Virginia in what was ultimately a lost cause.

The house and plantation belonged to his wife Mary Custis’s family. He visited her here as a child and married her here in 1831. Lee never officially owned the house, but was the estate’s effective master after 1857 when Mary’s father died. George Washington Parke Custis was George Washington’s step-grandson. He had built the house as a memorial to the man he so admired. The house would become a museum filled with his various treasures connected to George Washington, some that would one day end up in the Smithsonian Institution.

Throughout most of his life, Robert E. Lee would come and go from this place where he once wrote “my affections and attachments are more strongly placed than at any other place in the world.” His military career took him to Mexico and West Point and other places, but he always returned to his home on the Potomac, the place where six of his seven children were born.

When his father-in-law died, Lee took leave from the Army for several years to try to bring the deteriorated estate back to productivity. Custis’s will had provided for the emancipation of his slaves, no later than five years after his death. 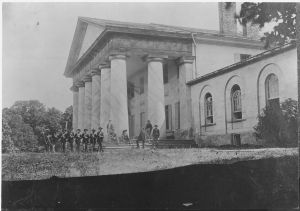 The volatile events of the nation overtook the family’s priorities. When Lee resigned from the U.S. Army everything changed. Mrs. Lee left the home in May 1861 after her husband took command of Virginia’s forces. Union troops occupied the surrounding land, preparing to build defenses and secure the land around the capital city. In 1864 the U.S. government took possession of the property when Mrs. Lee did not appear in person to pay property taxes. With a growing need for burial places for the war dead, the United States government established a military cemetery on the estate’s grounds, ensuring that Lee would never return to the family land.

Lee’s son Custis sued the U.S. government for unlawful confiscation of his inheritance and in 1882 the Supreme Court ordered the government to compensate the Lees. Recognizing the house’s significance to the nation’s story, the National Park Service acquired the property in 1933 and restored the house and grounds.

The house recently underwent a major renovation and stands restored to its pre-Civil War appearance. The Park Service staff does a great job of interpreting this complex family, including the story of the enslaved people who worked the estate. No visitor should visit Arlington National Cemetery without a stop at this fascinating house. 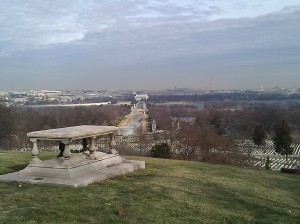 View east of Washington D.C. from the front steps of Arlington House

Author, public historian, and consultant. Author site: timgrove.net - My fifth book, Star Spangled: The Story of a Flag, a Battle, and the American Anthem, was published in May 2020. Consulting site: grovehistoryconsulting.com I specialize in exhibition development, interpretive planning, education strategy, and history relevance. I'm passionate about helping history organizations of all sizes and kinds make history more relevant for their communities and the people they engage with. I'm happy to consider many types of writing projects for informal learning organizations. Reach me at tim@grovehistoryconsulting.com or authortimgrove@gmail.com
View all posts by Tim →
This entry was posted in 19th century, cemetery/grave, Civil War, house, national park, President and tagged arlington cemetery, Robert E. Lee, VA. Bookmark the permalink.

1 Response to The house in the cemetery