The iconic view of New Orleans includes the dramatic statue of Andrew Jackson on a rearing horse, the St. Louis Cathedral rising in the background. The statue commands  the surrounding park, Jackson Square, named for the man who became a hero two hundred years ago this month.

On a recent trip to New Orleans I got drawn into the War of 1812, that war that most Americans don’t know a thing about. I happened to visit on the weekend after the 200th anniversary of the war’s final battle and missed the hundreds of reenactors from around the world who came to educate people about the battle.

The Battle of New Orleans took place January 8, 1815 and lasted less than two hours — the major fighting only 30 minutes. It was a great victory for the Americans over the mighty British and made a hero out of a man named Andrew Jackson.

A little background: In late August and early September 1814, the British had attacked and burned first Washington, D.C. and  and then attempted to destroy Baltimore. They were repelled, thanks in part to Fort McHenry. They then turned their sights on New Orleans.

Control of the mouth of the Mississippi River and the port of New Orleans would threaten the economic stability of the entire region and give them control of the Mississippi River and make up for losses earlier in the War. When Britain defeated Napoleon in Europe in the spring of 1814, they finally had troops to spare. A force of 10,000 strong headed for the major southern city of New Orleans.

In an ironic twist of history, officials signed the Treaty of Ghent ending the War in Belgium on December 24, 1814 but it was not ratified by the United States until February. So fighting continued into the new year.

Enter the dashing Major General Andrew Jackson, a frontier general from Nashville. He vowed to drive the Brits, whom he called “the common enemy of mankind,” from American soil. His forces were greatly outnumbered and he launched a recruitment campaign to assemble an eventual force of about 5,000 US troops, state militiamen, volunteers of all colors and even Jean Lafitte’s Baratarian pirates.

I headed for the Chalmette battlefield, a few miles downriver from New Orleans. The park consists of a flat field next to the Mississippi River with a 1.5 mile paved road with interpretive markers telling the story. Here, Jackson’s troops dug a line of defense, built a mud rampart and positioned eight artillery batteries. Outnumbered against hardened British war veterans, they held firm as a wave of redcoats attacked. The British General Sir Edward M. Pakenham and a few other British officers were killed during the offensive. The British retreated suddenly and the Americans, or “dirty shirts” as the Brits called them, rejoiced in their victory.

The Chalmette Monument rising 100 feet above the battlefield honors the American troops. The cornerstone was laid during the 25th anniversary celebrations of the battle, Andrew Jackson in town for the event. It was not completed until 1908. Visitors can climb to the top, but the small windows obscure unimpressive views.

The Battle of New Orleans helped assure ratification of the treaty to end the war and increased America’s prominence on the world stage. It also made Andrew Jackson a household name. As news spread throughout the nation, everyone wanted to know more about this unknown American general who had whipped the British army. Almost overnight Jackson became a national hero.

Adjacent to the battlefield is the Chalmette National Cemetery established by Abraham Lincoln in May 1864 for Union soldiers who died in Louisiana during the Civil War. Four Americans who died in the War of 1812 are also buried there, but only one from the Battle of New Orleans. One of the mysteries of the battle is where the British dead were buried. The slain British officers’ embalmed bodies were shipped back home in rum barrels. But what happened to the rest of the dead?

Now the British government wants to build a $2 million memorial on the battlefield that according to British Chancellor George Osborne will honor “the British soldiers who fought in this conflict, and mark the fact that our two nations have never fought since.” The steward of the property, the National Park Service, has approved. 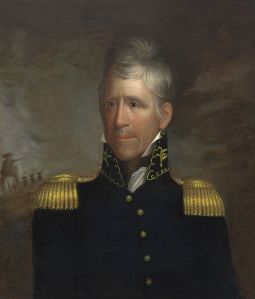 Two temporary exhibitions provide interesting perspectives on Andrew Jackson and the Battle of New Orleans. One at the Historic New Orleans Collection and one at the Louisiana State Museum on Jackson Square. The latter features Andrew Jackson’s uniform coat that he was wearing in the battle, the first time it has been in the city since the battle. On loan from the Smithsonian, it stands in a case next to an 1817 portrait of Jackson wearing the same coat, also on loan from the Smithsonian.

I’m guessing most people who revel in Mardi Gras festivities and stagger down Bourbon Street and eat beignets at Cafe du Monde don’t know much about the hero of New Orleans and the battle that made him famous.

Author, public historian, and consultant. Author site: timgrove.net - My fifth book, Star Spangled: The Story of a Flag, a Battle, and the American Anthem, will be published in early 2020. Consulting site: grovehistoryconsulting.com I specialize in exhibition development, interpretive planning, education strategy, and history relevance. I'm passionate about helping history organizations of all sizes and kinds make history more relevant for their communities and the people they engage with. I'm happy to consider many types of writing projects for informal learning organizations. Reach me at tim@grovehistoryconsulting.com or authortimgrove@gmail.com
View all posts by Tim →
This entry was posted in 19th century, cemetery/grave, military, national park, President and tagged Andrew Jackson, Battle of New Orleans, Chalmette Battlefield, LA, New Orleans, War of 1812. Bookmark the permalink.

2 Responses to Last battle against Britain