My new book: First Flight Around the World

I’m proud to announce my new book, First Flight Around the World:The Adventures of the American Fliers Who Won the Race. It was just published by Abrams Books for Young Readers. While targeted to ages 10-14, the book works for adults as well. It’s based on a journal of the trip written by one of the airmen. It includes more than 100 historic photos from the National Air and Space Museum archives. Plus, one of the airplanes is on display at the museum. It’s a grand adventure story that most people do not know. Here’s a post I wrote for the National Air and Space Museum blog, with a quick summary of the flight.

Read some of the reviews on Amazon.

The flight began and ended in Seattle where a memorial to the flight stands in Warren G. Magnuson Park. I’m hopefully going there in July. In the meantime, enjoy this post I wrote last year about a site in San Francisco with connections to the World Flight.

I’m a planner, so when I travel I’m usually intentional about seeing places that relate to my professional history interests. But every now and then I stumble upon a place that was somehow off my radar. Such was the case recently when I visited a friend in San Francisco. It was a beautiful day and I had no agenda, short of getting outside and enjoying the weather and my friend’s company. He had not lived in the city long, so did not know it well. We decided to hike around the Presidio and take in views of the Golden Gate bridge and sailboats in the bay. We parked at Crissy Field. The broad expanse of grass along the bay was dotted with giant steel sculptures by Mark di Suvero, a temporary exhibition mounted by SFMOMA. At the edges of the field were low buildings that looked like airplane hangars. My friend’s wife had requested that he check out an indoor trampoline park located in one of them.

Only when I stopped to read a historic marker did it hit me. This is the famous Crissy field, the most intact 1920s Army airfield west of the Mississippi River. Minus the buzz of aircraft and cheers of crowds, the grass field and several original buildings offer a glimpse of the early years of aviation when “airmindedness” was the rage. Many of the pioneers of aviation passed through Crissy field. 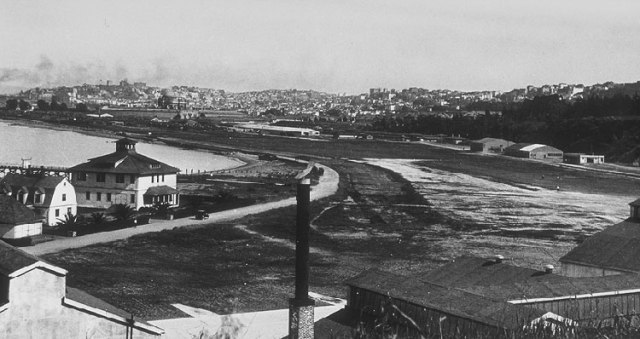 In 1919 the army sent 61 planes on a test flight across the continent. Fifteen planes left from this field heading east. Forty-six left Long Island, New York heading west. Only nine planes finished the flight, including Captain Lowell Smith, later commander of the world flight. Major Dana Crissy was among those killed in the attempt and the commander of the Presidio airfield, Major Hap Arnold, requested the field be named for Crissy.

Crissy Field, completed in 1921, was constructed on the site of the Panama-Pacific International Exposition. Lincoln Beachey, called the father of aerobatics, thrilled Exposition crowds with his daring maneuvers. Sadly, he died in a spectacular crash during a show at the Exposition in front of almost 250,000 people.

I’m currently writing a book about the 1924 Army Air Service round-the-world flight. Beginning in Seattle, the flight of four Douglas World Cruisers traveled west, becoming the first across the Pacific and the first across the China Sea, and ultimately the first around the world. Five other countries set out to challenge them and it became a race for national prestige. Flying long distances was no easy feat; one of the planes crashed into a mountain in Alaska (both crew members miraculously survived) and one ended up at the bottom of the North Sea (again, the crew survived). When they reached Boston, they began what was essentially a victory lap across the United States toward the finish line in Seattle. At Crissy Field, thousands of people greeted them. 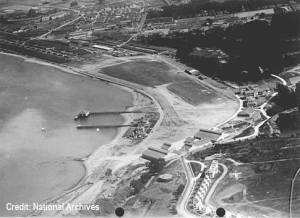 In 1925, the Navy attempted a flight to Hawaii. Two seaplanes left the bay by Crissy Field, one faced engine failure early and safely returned. The other ran out of fuel near Hawaii and eventually reached Kauai by sailing there with sails made from the plane’s canvas wings. Test your navigation acuity with an interactive about this flight from the National Air and Space Museum.

Author, public historian, and consultant. Author site: timgrove.net - My fifth book, Star Spangled: The Story of a Flag, a Battle, and the American Anthem, was published in May 2020. Consulting site: grovehistoryconsulting.com I specialize in exhibition development, interpretive planning, education strategy, and history relevance. I'm passionate about helping history organizations of all sizes and kinds make history more relevant for their communities and the people they engage with. I'm happy to consider many types of writing projects for informal learning organizations. Reach me at tim@grovehistoryconsulting.com or authortimgrove@gmail.com
View all posts by Tim →
This entry was posted in 20th century, city/town, national park, West and tagged CA, Crissy Field, Douglas World Cruiser, world cruiser, world flight. Bookmark the permalink.

2 Responses to My new book: First Flight Around the World