I just visited the French frigate Hermione, a replica of the ship that brought the Marquis de Lafayette back to America in 1780. Under construction for almost twenty years, the Hermione is, according to the website,  the largest and most authentic Tall Ship built in the past 150 years. The project cost around $28 million! The original ship was completed in 1779 and was the pride of the French Navy. Its sister ship, the Concorde, was captured by the British and they recognized its magnificence. Their naval engineers drew detailed schematics (reverse engineering) to build a similar vessel for their own fleet. These plans allowed for the successful replication.

Upon his arrival in Boston, Lafayette went immediately to meet General Washington. The Hermione made its way to Philadelphia in 1781 and members of the Continental Congress paid a visit to the ship to commemorate her service to the American Revolution the previous year. The ship then sailed for the Chesapeake Bay to join the French flotilla that trapped the British navy at Yorktown, leading to their surrender.

I visited the ship at anchor in Alexandria, Virginia on the Potomac River, a few miles downriver from Washington, D.C. I’ve walked the wharf in Alexandria many times, but this time the sight caught my breath. I rounded the corner and headed toward the water and there was a sight that would have been so familiar in the 18th century. The tall masts of  a sailing vessel from a foreign port of call. She towered 184 feet above the water, with 3 masts, 19 sails, 1000 pulleys, and 15 miles of rope… a beautiful specimen of naval history.

My friend had snagged two tickets for the last public viewing of the ship. A huge crowd stood at the marina gawking at the star attraction. We waited until our allotted time slot, praying a huge storm would hold off. But no, the rain hit and we had no place to go. The people on the ship huddled under tarps on deck and weren’t about to go into the rain to allow us to board.

Finally, despite the rain and soaked to the skin, we climbed the steep gangway to explore the main deck. While in line, we had noticed the crew rush up the rope ladders to better secure the huge sails. They clambered around, surefooted despite the height. This must come with years of sailing experience, I thought.

The French crew in their red polo shirts engaged with visitors, answering questions. A few were dressed as 18th century sailors. I wasn’t sure what their role was. There was no guided tour and the educator in me wanted to make sure the public was learning something. Alas, I had to explore the website after my visit in order to learn more. I asked one of the crew what Hermione means. In accented English he explained that it comes from Greek mythology. Hermione was the daughter of King Menelaus of Sparta and Helen of Troy. 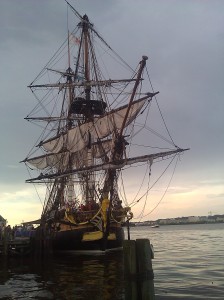 Of course, only later did I think of a better question. What happened to the original Hermione? In 1793 while in battle against the usual foe, the British, she grounded off the coast of western France and was wrecked by heavy seas.

If you have the opportunity to see the Hermione, go! Here is her future schedule

Did you visit the Hermione? Tell about it.

Author, public historian, and consultant. Author site: timgrove.net - My fifth book, Star Spangled: The Story of a Flag, a Battle, and the American Anthem, was published in May 2020. Consulting site: grovehistoryconsulting.com I specialize in exhibition development, interpretive planning, education strategy, and history relevance. I'm passionate about helping history organizations of all sizes and kinds make history more relevant for their communities and the people they engage with. I'm happy to consider many types of writing projects for informal learning organizations. Reach me at tim@grovehistoryconsulting.com or authortimgrove@gmail.com
View all posts by Tim →
This entry was posted in 18th century, International, military and tagged France, Hermione, Lafayette, Marquis de Lafayette, tall ship, the French frigate Hermione. Bookmark the permalink.