The power in a view

I checked into the hotel and walked into my room. It was a room with a view alright — a view south to Canada. Where was I? 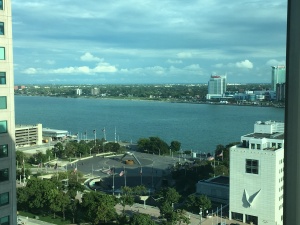 Detroit. Other than thinking it cool that I was maybe the only place the United States where I could look south into Canada, I didn’t realize until the next day what profound historical significance the view has. I was attending the annual meeting of the American Association for State and Local History and one of my African American history colleagues spoke of an emotional moment she had looking across the Detroit River into Windsor, Ontario.  This view had signaled FREEDOM for enslaved people on the journey to escape bondage. The sight of Canada represented the promise of a new life with no fear of slave catchers or the Fugitive Slave Act of 1850. After traveling many miles and not knowing who to trust along the entire way, slaves came to the river, the last hurdle. It’s hard to fathom the intensity of emotion, of hope, that this view must have triggered for the fugitive. I’d had my own small glimpse of the dehumanizing aspect of slavery when I participated in a program at Conner Prairie in Indiana, but there’s absolutely no way for most people in America today to understand the power of literally seeing freedom on the horizon. 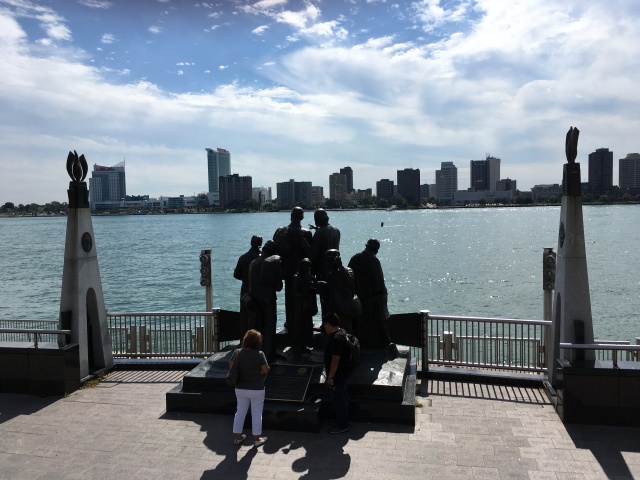 It is estimated that upwards of 20,000 slaves escaped to freedom through the state of Michigan, and most of those probably through Detroit – codenamed “Midnight” – on the

Underground Railroad. They were headed toward freedom, codenamed “Dawn” (meaning the end of their journey), and would need to cross “Jordan,” as in the Detroit River and a Biblical reference to the river that bordered the Israelites’ Promised Land.

In 2001 for the city’s tercentenary, the city erected the International Memorial to the Underground Railroad.  A sculpture titled “Gateway to Freedom” faces Windsor, Canada and features a cluster of people looking across the river with anticipation. The man pointing toward Canada is George DeBaptist, a resident of Detroit and one of the most notable abolitionists in the Detroit Underground Railroad network. Born a free man in Virginia, he moved to Detroit as an adult and opened several businesses including a barber shop, a bakery, and eventually a steamship line. He used his boat, the T. Whitney, to secretly transport slaves to freedom. 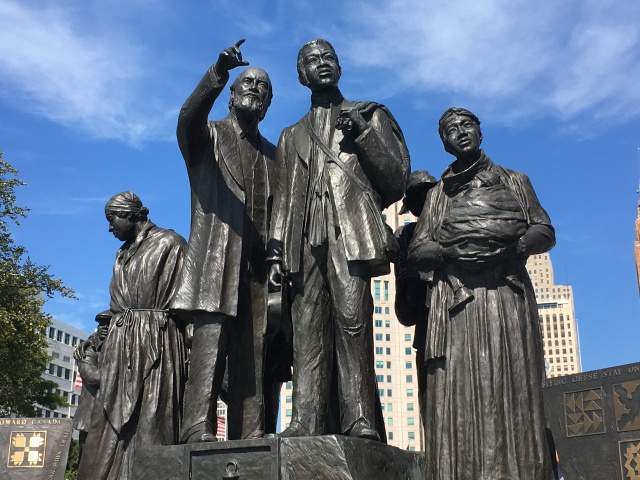 A corresponding statue called the “Tower of Freedom” celebrates emancipation and stands across the river in Windsor.

It’s important to mention that the sculptor was Ed Dwight who has created other notable sculptures around the country. Prior to his artistic career, Dwight served as an Air Force test pilot and was the first African American astronaut trainee.

On my next visit to Detroit, I’ll have to delve more into the sites associated with the Underground Railroad. And maybe I’ll have the time to head across the river and see the other part of the story.

Other powerful views I’ve written about:

Author, public historian, and consultant. Author site: timgrove.net - My fifth book, Star Spangled: The Story of a Flag, a Battle, and the American Anthem, was published in May 2020. Consulting site: grovehistoryconsulting.com I specialize in exhibition development, interpretive planning, education strategy, and history relevance. I'm passionate about helping history organizations of all sizes and kinds make history more relevant for their communities and the people they engage with. I'm happy to consider many types of writing projects for informal learning organizations. Reach me at tim@grovehistoryconsulting.com or authortimgrove@gmail.com
View all posts by Tim →
This entry was posted in 19th century, civil rights, International and tagged Detroit, MI, slavery, Underground Railroad. Bookmark the permalink.

1 Response to The power in a view