Two new museums devoted to telling the story of the American Revolution opened within a month of each other in Spring 2017. What are the odds? Philadelphia and Yorktown, Virginia both seemed like obvious places for such a museum. The museums are about a five-and-a-half-hour drive from each other. It took me a while, but I finally  managed to visit both of them. This isn’t a review, but some observations about them. Bottom line: they are both worth visiting.

Both museums have embraced social and cultural history and seek to tell the stories of previously unheard voices – women, African Americans, and Native Americans. Both include local flavor to a national story. In Philadelphia it’ s the Battle of Brandywine, in Virginia, it’s the siege of Yorktown. And both include a hall of photographs of the revolutionary generation in their older years – a powerful way to personalize a story that pre-dates the invention of photography.

Having spent a lot of time in Philadelphia, I eagerly anticipated the new Museum of the American Revolution which opened April 19, 2017. I think it’s a good addition to the city’s cultural attractions. It sits a few blocks east of Independence Hall, the city’s star attraction, and complements that building and other history sites in the city. And let’s face it, international visitors and even most Americans are fuzzy on the story. A ranger-led tour of Independence Hall cannot possibly provide enough context to give most visitors an understanding of the events that changed the course of history.

The galleries pose four questions throughout:

While I’ve read some criticisms that the collection isn’t terribly broad, I was impressed with the variety of objects on display — about 500 of them (similar to Yorktown). One particularly memorable object is the tiny pair of red infant shoes supposedly made from the fabric of a British redcoat. The seven tableaus featuring life-like figures are an attempt to personalize and dramatize the exhibition. One depicts a crowd toppling a statue of King George III in New York, another a Hessian soldier, and another highlights a debate within the Oneida nation about which side to take.

Some of my favorite sections: a comparison wall of war propaganda, a liberty tree setting that includes wood from an actual liberty tree that you can touch, and a recreated privateer ship hands-on area filled with tactile reproduction objects. The Battle of the Brandywine theater is an attempt to give museum visitors a “battlefield” experience. It could have been better executed and comes across as corny. 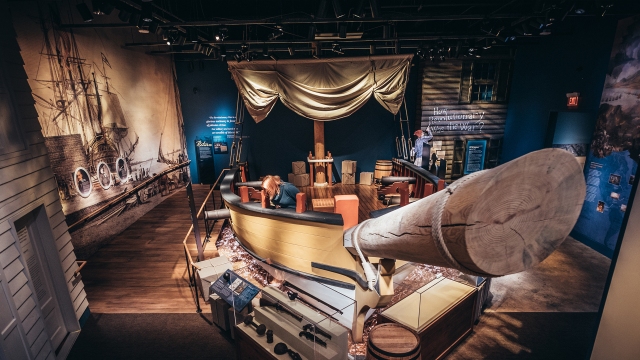 The films scattered throughout the core exhibition got the serious documentary-style treatment featuring a soaring music soundtrack that was a bit annoying (I wanted a little variety in tone… whimsy perhaps?). A major emphasis is placed on the museum’s key relic: General George Washington’s field tent. Set apart in a separate room, the 12-minute tent “experience” is over-hyped.  I understand that the museum put a lot of work into its restoration and that anything touched by Washington is holy, but a movie ends, the screen rises and there is the glowing tent accompanied by angelic choirs (OK, not quite, but same idea.)

Through it all, the multiple perspectives and variety of kinds of history (political, military, social, cultural, Native American, etc.) support a narrative that provokes thought and gives visitors stories that transcend more traditional presentations of the topic.

The museum also includes a special exhibition gallery and should anticipate an uptick in attendance with its upcoming exhibition Hamilton Was Here: Rising Up in Revolutionary Philadelphia, on display from October 27, 2018-March 17-2019.

A “new” historic site in Philadelphia

Author, public historian, and consultant. Author site: timgrove.net - My fifth book, Star Spangled: The Story of a Flag, a Battle, and the American Anthem, will be published in early 2020. Consulting site: grovehistoryconsulting.com I specialize in exhibition development, interpretive planning, education strategy, and history relevance. I'm passionate about helping history organizations of all sizes and kinds make history more relevant for their communities and the people they engage with. I'm happy to consider many types of writing projects for informal learning organizations. Reach me at tim@grovehistoryconsulting.com or authortimgrove@gmail.com
View all posts by Tim →
This entry was posted in 18th century, American Revolution, military, President and tagged American Revolution, museum, PA, Philadelphia. Bookmark the permalink.