The Authors Next Door 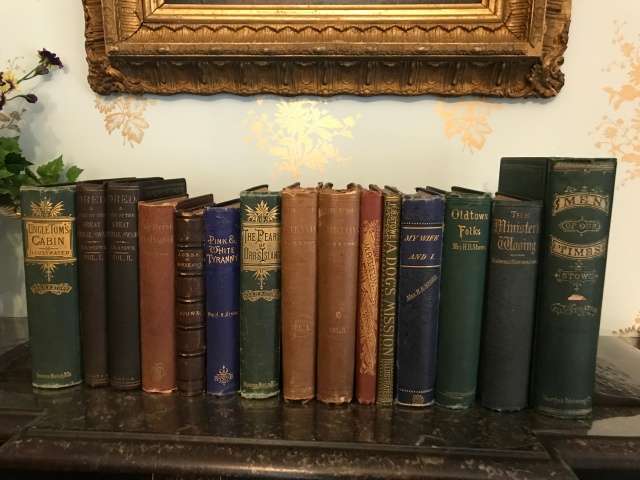 I grew up playing the card game Authors. In my childhood I hadn’t read most of the books featured in the game, but the more I played, the more familiar I became with each author’s works. Mark Twain, of course, was included, as was Charles Dickens. Over the years, as I’ve written more and more and published books (fifth one coming 2020!). I’ve learned about the publishing world and am fascinated with the individual writing process of authors and how the challenges of getting published have changed over time. I really enjoy visiting the homes of historic authors to see the space in which they wrote. In recent years I visited Dickens’ home in London and the tiny apartment in Atlanta where Margaret Mitchell penned Gone With the Wind. Several weeks ago, while in Hartford, Connecticut for a history conference, I made sure to hit two biggies: the homes of Samuel Clemens and Harriet Beecher Stowe. They might be considered the JK Rowlings of their day, with major worldwide sales, but to each other they were the neighbors. They lived next-door to each other in a neighborhood called Nook Farm. 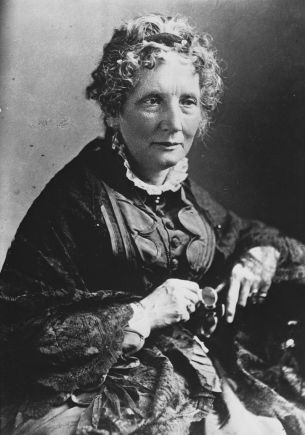 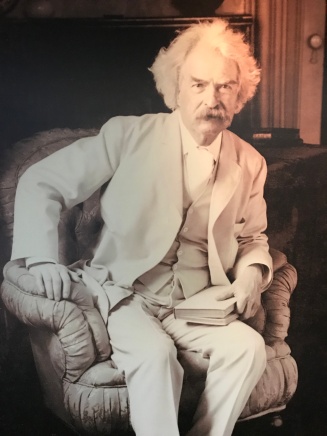 Stowe built her Victorian Gothic retirement home in 1873 with revenue from her books. She was already internationally famous, with Queen Victoria among her readers. Her most enduring book, Uncle Tom’s Cabin, published in 1852 was so influential that even President Lincoln acknowledged its impact when he met her at the White House in 1862 and supposedly said “So you’re the little woman who wrote the book that started this great war.” Poet Langston Hughes called it “the most cussed and discussed book of its time.” It sold 10,000 copies its first week and 300,000 its first year in the US and a whopping 1.5 million copies in one year in Great Britain! She published more than 30 books during her life. While she didn’t write her most famous book in this house, the tour of the house includes a dining table at which she sat while writing it. Her bedroom includes a small round table surrounded by pages of paper strewn over the floor. I asked if that was her writing process. Yes, apparently she liked to spread out while writing. 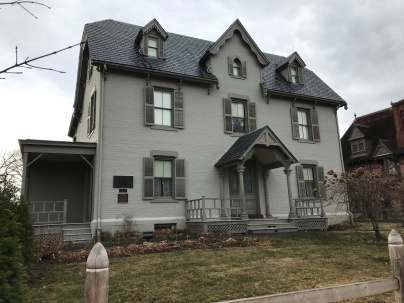 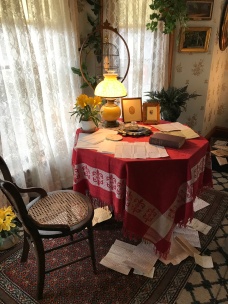 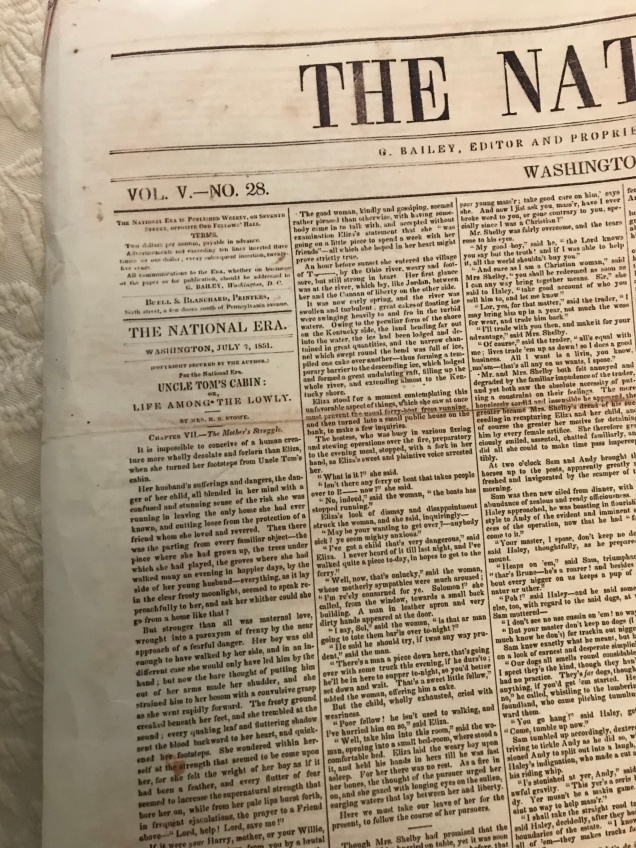 Before Uncle Tom’s Cabin was a book, it was a newspaper serial

The Stowe house tour is about ideas, not about the furniture. It is about gaining insight into Stowe’s family and the culture that produced this powerful statement against the horrors of slavery.  In the front entrance hallway sits several shelves holding thick volumes filled with pages of signatures given to her by the women of Great Britain during a tour there in 1853, a petition from Great Britain to America condemning slavery. This gesture no doubt touched her deeply as she built the house about twenty years later and chose this spot to display them .

Across the lawn stands the house where Twain (known is just Sam around the neighborhood for his given name, Samuel Clemens) wrote The Adventures of Tom Sawyer and The Adventures of Huckleberry Finn (called the Great American Novel). Twain moved his family to Hartford in 1873 to be near his publisher and used money from his wife’s family to build the comfortable home. Here on Farmington Ave. he sat in a room on the second floor, often tempted by the nearby billiard table, and wrote some of his most famous works. They would earn him a worldwide audience and give us some of American literature’s most colorful characters. Over his life he would write at least twenty-three books, most likely more. 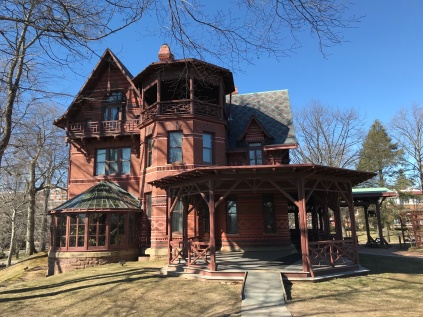 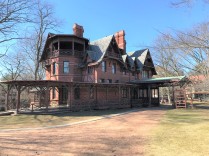 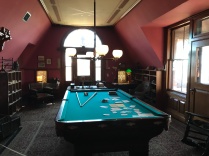 The room where Twain wrote Tom Sawyer and Huckleberry Finn

It’s fun to imagine the Clemens as guests in the Stowe dining room and the Stowes sitting by a crackling fire in the Clemens’ library room. According to my guide, it was Stowe who suggested that Clemens add a conservatory on the end of the library.

For the Clemens, bad investments would force them from the house to earn money on lucrative foreign speaking tours. They loved the house and planned to return. However their daughter ended up dying in the house during their absence and emotionally they decided they could never return. Mrs. Stowe gradually descended into dementia (most scholars today think she had Alzheimers) and began writing Uncle Tom’s Cabin all over again, from memory, as if for the first time. 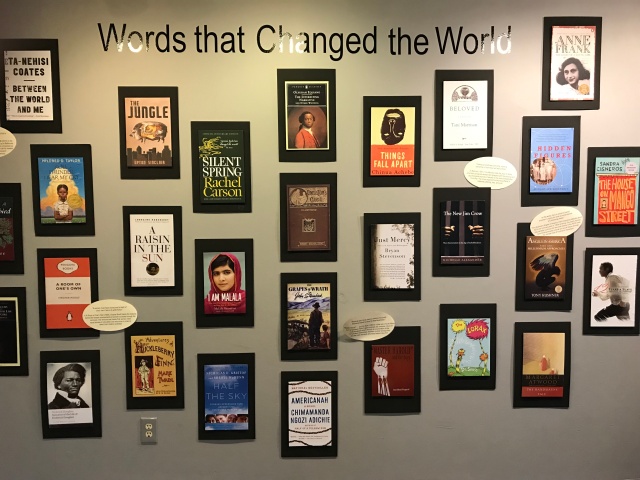 The homes of these two titans of American literature stand preserved today as testaments to the power of books to change the world.

Author, public historian, and consultant. Author site: timgrove.net - My fifth book, Star Spangled: The Story of a Flag, a Battle, and the American Anthem, was published in May 2020. Consulting site: grovehistoryconsulting.com I specialize in exhibition development, interpretive planning, education strategy, and history relevance. I'm passionate about helping history organizations of all sizes and kinds make history more relevant for their communities and the people they engage with. I'm happy to consider many types of writing projects for informal learning organizations. Reach me at tim@grovehistoryconsulting.com or authortimgrove@gmail.com
View all posts by Tim →
This entry was posted in 19th century, art and culture, house, popular culture and tagged American literature, author, books, CT, Harriet Beecher Stowe, Mark Twain. Bookmark the permalink.