A day shy of the 154th anniversary of the assassination of President Abraham Lincoln, I stood looking at the bucolic southern Maryland countryside, trees tinged with the bright green of early Spring. Staring at the simple white frame house surrounded by rolling fields, I tried to imagine the sinister events that played out on this spot. A knock on the door at 4 a.m. alarmed the residents. Who could it be? The Civil War had just ended but random soldiers were roaming the countryside. When you’re a doctor, I suppose injured people can arrive at any hour. This was the home of the infamous Dr. Samuel A. Mudd, and I was following the John Wilkes Booth escape route.

I’d been to Ford’s Theatre in Washington, site of the assassination, many times, and had always wanted to delve into the escape a little more. When a friend from Texas arrived for a weekend visit, I suggested the trip and he eagerly agreed. I’m a Yankee, he’s a Southerner, could be interesting.

The famous actor John Wilkes Booth shot President Lincoln around 10:15 p.m. as Lincoln watched a performance of the play Our American Cousin. Booth had no idea if he’d actually inflicted a mortal wound. He jumped from the presidential box onto the stage, breaking his leg, and escaped, riding hard for the Navy Yard Bridge. The bridge had closed to traffic at 9 and the guard wondered his name and why he wanted to cross. He gave his real name, “Booth.” Why would he do that? For some reason the guard waved him on.

About 8 miles from Washington, Booth met up with a fellow conspirator Davey Herold who knew the area of Maryland to which they were headed. Their first stop was Mary Surratt’s tavern, 13 miles from Washington. As long as they stayed ahead of the big news, they were relatively safe. Probably no one in Maryland knew of the assassination at this point.

My friend and I pulled up at the Surratt House Museum, the two-story red house that in 1865 served as a tavern, local meeting place and post office. Owned by Mary Surratt, a widow in whose D.C. boarding house the conspirators had met several times, the place was being leased by John Lloyd. 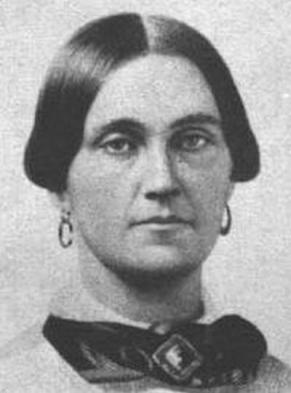 Mary Surratt and Samuel Mudd: the owners of the two homes we’d visit on the escape route may be familiar to many Americans, but it’s not their stories that people come to hear about. The star of the show at both places is John Wilkes Booth, and the questions to answer are: what relationship did they have with him? what did they know? and how did they contribute to the events of April 14? But in its grand complexity, history does not always reveal all of the answers. While official courts decided Surratt’s and Mudd’s guilt or innocence, there remains those who maintain that both were unjustly condemned.

Booth and Herold’s stop at the Surratt tavern lasted no longer than about 5 minutes. They stopped to pick up some supplies that Mary Surratt had delivered earlier that day. She had instructed Lloyd that people would be stopping by that night for the package and for two guns that her son had hidden in the house weeks earlier. Booth never entered the house that night, but Lloyd became a witness who could offer enough information that would eventually condemn Mary Surratt to the gallows for her part in the plan. 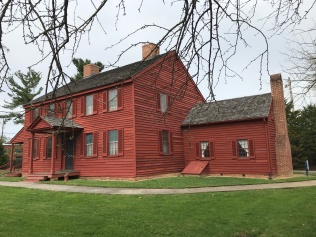 The Surratt House Museum in Clinton, Maryland, is restored to its mid-nineteenth century appearance and visitors can tour the rooms and learn not only about the events of the night but about the family, life in a tavern at a sleepy crossroads, and about this safe house for the Confederate underground.

Fortified by some whiskey, with supplies in hand, Booth and Herold continued on their way. But as they left, Booth could not resist bragging about his accomplishment to the surprised Lloyd.

Now Booth desperately needed to find a doctor to examine his leg. Fortunately, he knew one. Hence, he and Herold appeared at Mudd’s doorstep at 4 a.m. 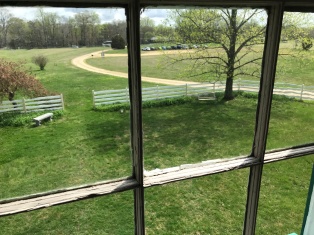 The view to the front yard.

Visitors can look out the front door, imagine the dark night, a young man requesting help for a stranger on horseback lurking away from the house.  Mudd’s guilt or innocence is murky just like Surratt’s. The Mudd house is privately-owned and operated and tends to stress the doctor’s innocence. But was he? Mudd had met Booth several times and had even hosted him overnight at his house several months earlier. Booth may have shaved his trademark mustache and added a fake beard, but while Mudd later denied it, surely he recognized Booth. The assassin decided not to tell Mudd of his deed. Since the news had not reached the area yet, Booth and Herold accepted the Mudds’ offer of hospitality after Mudd treated Booth’s broken leg. They plopped down exhausted in the upper front bedroom to try to get some sleep.

The road Booth and Herold traveled away from Mudd’s home.

Visitors to the Mudd house today can see the original sofa on which Mudd examined Booth’s leg. Again, Booth, arguably in much pain, made it easier for his hunters. The doctor had to cut off the hip boot to get to the broken bone, and Booth left the boot in the house, forgetting perhaps that it had his name written inside it. During the next day, Mudd went to town and heard the tragic news. He knew then who his visitors were and what they had done, but he did not turn Booth in to the authorities. He did realize his family could be in grave danger if Booth was caught on his property. He returned home and confronted Booth,  giving Booth confirmation that his shot had been successful. Mudd pushed him out the door, with directions to another safe place, and knowledge of how to avoid the Zekiah swamp behind his house. He also waited 24 hours after Booth left to inform authorities who were now swarming throughout the region.

An exhibit case at the Mudd House, holding items made by Mudd during his imprisonment in Florida.

Some of Mudd’s defenders say that Mudd, a Confederate sympathizer, had met with Booth months earlier to support a scheme to kidnap Lincoln, but knew nothing of the assassination plan. In any case, Mudd eventually was arrested, charged with conspiracy, and came within one vote of the gallows. He was sentenced to life in prison at Fort Jefferson, off the coast of Florida. He lucked out when an epidemic of yellow fever hit the fort and used his medical skills to treat many patients. For this act, he received freedom four years into his sentence and returned to his wife, children and farm.

Guilty or innocent? I wish both sites had used primary sources materials more effectively to encourage their visitors to think critically about the two people’s roles in the conspiracy. If you go to the Mudd house, try to go on a day when the extra tour of the grounds is offered by an enthuasiastic young history teacher who  gives a great tour down to the Zekiah swamp.

The escape route continues following Booth and Herold’s twelve-day run over country roads, across the Potomac River, and into Virginia where ultimately Booth was shot dead by the US military and Herold was captured. He eventually hanged alongside Mary Surratt.

During his escape, Booth kept a diary in which he wrote: “To night I try to escape these blood hounds once more. Who can read his fate.  God’s will be done.” He was defiant until the end, adding: “I do not repent the blow I struck. I may before God but not to man.”

Author, public historian, and consultant. Author site: timgrove.net - My fifth book, Star Spangled: The Story of a Flag, a Battle, and the American Anthem, was published in May 2020. Consulting site: grovehistoryconsulting.com I specialize in exhibition development, interpretive planning, education strategy, and history relevance. I'm passionate about helping history organizations of all sizes and kinds make history more relevant for their communities and the people they engage with. I'm happy to consider many types of writing projects for informal learning organizations. Reach me at tim@grovehistoryconsulting.com or authortimgrove@gmail.com
View all posts by Tim →
This entry was posted in 19th century, Civil War, house, military, President and tagged Abraham Lincoln, assassination, Civil War, John Wilkes Booth, Mary Surratt, MD, Samuel Mudd. Bookmark the permalink.

1 Response to Tracking a Killer