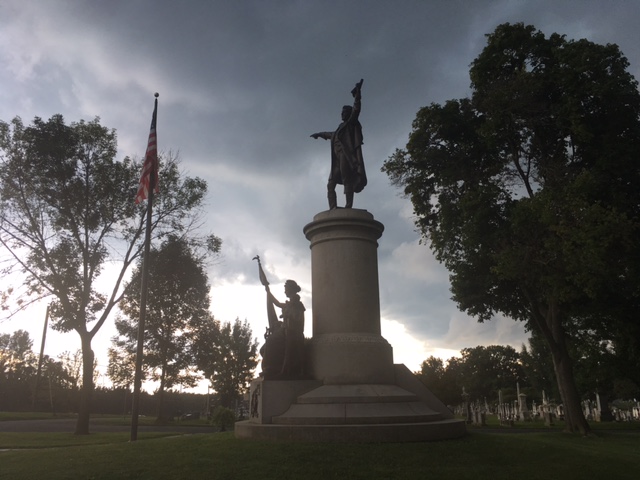 In nonfiction set in the past, a character can best come to life through words he left behind or words his contemporaries spoke about him. When working with limited historical source materials, one of the writer’s challenges is to craft well-rounded characters.  For my upcoming book Star Spangled: The Story of a Flag, a Battle and the American Anthem, I wanted to tell the story from multiple perspectives. I started out with five main characters and ended up adding one: four American and two British. As an author digs into sources, he gradually gets to know his characters. In my case, two did not leave personal records, only business records.  I was looking at one historical event, the Battle of Baltimore in 1814, and at each character’s role in the story around the battle. But to provide context, I also needed to look in part at the entirety of their lives, with specific emphasis on how they got to be a key player in the story I was telling. Of course, curiosity drove me to find out about the end of their lives, too. The final resting places of four of them were in easy driving distance for me, so at some point I decided to pay my respects to the Americans. (The Brits rest in London and Paris, maybe some day!) It turned out to be a fascinating comparison. You can tell a lot about a person by looking at his or her grave. Here’s what I discovered:

Most Americans have probably only heard of one of my main characters, Francis Scott Key, author of the United States’ national anthem. Key lived most of his life in Washington, D.C. His family home was north of Frederick, Maryland and his final resting place is a grandiose monument in a cemetery in downtown Frederick, about an hour north of DC. It’s easy to find and a US flag flies next to the grave. Large interpretive panels tell his story and an audio plays the anthem. Ironically, he died in Baltimore, decades before his poem became the words to America’s official anthem. The Key Monument Association erected a memorial in 1898 where his remains were moved. 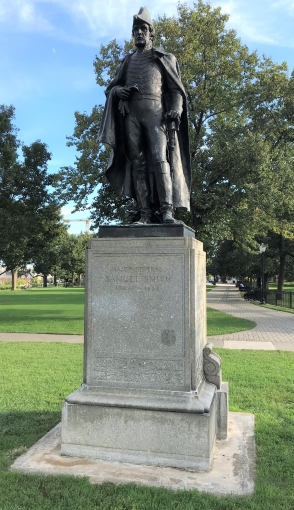 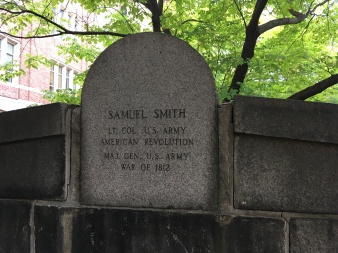 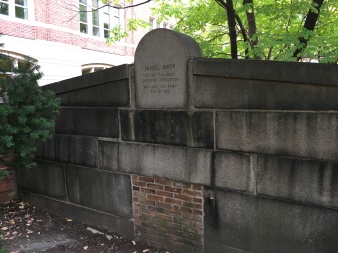 Samuel Smith,  Revolutionary War hero, General in the Maryland militia, longtime Maryland Senator, President Pro Tempore of the US Senate, and in my story, hero of the defense of Baltimore, was the man with the plan. While the majority of Americans have never heard of him, Baltimore honors him with a statue on Federal Hill overlooking the harbor. He lived his entire life in service to the people of Baltimore and his role during the Battle of Baltimore is well-remembered in the city. His funeral procession was the longest Baltimore had ever seen. He is buried in a family crypt in the Westminster Presbyterian Church cemetery in downtown Baltimore where the tourists come to see a different grave. Not far from his resting place is that of writer Edgar Allen Poe, the star attraction in the cemetery. 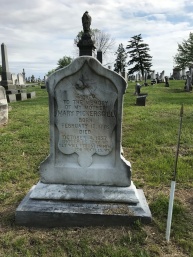 A business woman named Mary Pickersgill has been lost to history, overshadowed by another seamstress named Betsy Ross. But Mary’s house and business have been preserved as a museum today in downtown Baltimore. When she sewed two giant flags in 1813 at the request of officials from Fort McHenry, the Smithsonian did not even exist, but today her flag, known as the Star-Spangled Banner, is considered a national treasure in America’s preeminent history museum. A widow much of her life, she didn’t have the wealth of some of my other characters. She lies a few miles from downtown Baltimore in the sprawling Loudon Park Cemetery. Her rather simple grave includes a Bible verse Job 13:15. An additional plaque was added in 1976 to confirm her role in American history. Sadly, two wooden sticks at her grave were empty of flags when I visited.

Businessman Thomas Kemp was a famed shipbuilder in Fells Point in Baltimore. His shipyard built some of the fastest privateers of the day. They wrought major damage on British shipping and were the source of great ire. Kemp is least known of my main characters and after the battle, he moved his family to St. Michaels, Maryland on the Eastern Shore where he built a house which is today the historic Wade’s Point Inn, a peaceful place surrounded by the waters of the Chesapeake Bay. He is buried in a family cemetery on the property, his grave marked by a simple stone.

As to my British characters, I’ll need to travel to London and Paris if I want to pay my respects. Sir George Cockburn was a Rear Admiral who rose to fame in Britain as the person who directed the sack of Washington, D.C. He went on to an illustrious naval career and served as a member of parliament. He is buried at Kensal Green Cemetery in London.

The commander of the British troops in North America in 1814 was Vice Admiral Alexander Cochrane, a Scot. He endured the double embarrassment of British losses in Baltimore and New Orleans during the War of 1812, but was ultimately knighted for his service. He died in Paris and his remains lie in the Père Lachaise Cemetery there.

Author, public historian, and consultant. Author site: timgrove.net - My fifth book, Star Spangled: The Story of a Flag, a Battle, and the American Anthem, was published in May 2020. Consulting site: grovehistoryconsulting.com I specialize in exhibition development, interpretive planning, education strategy, and history relevance. I'm passionate about helping history organizations of all sizes and kinds make history more relevant for their communities and the people they engage with. I'm happy to consider many types of writing projects for informal learning organizations. Reach me at tim@grovehistoryconsulting.com or authortimgrove@gmail.com
View all posts by Tim →
This entry was posted in 19th century, cemetery/grave, military and tagged cemetery, MD, Star Spangled Banner. Bookmark the permalink.

3 Responses to Their final resting places