One of the most unique history sites

The Northern Neck of Virginia is a remote, flat region of corn and soybean fields sculpted by the rising and falling of the Chesapeake Bay’s tidal waters. It’s a long arm of land stretching east of Fredericksburg, between the Potomac and Rappahannock Rivers. In the 18th century, it was home to Virginia’s wealthiest dynastic families – the Lees, the Carters, and others. Their riches came from vast acres of tobacco, cultivated and harvested by thousands of enslaved workers. The vestiges of a past life are found in preserved homes and remnants that dot the rural landscape.  I recently visited a unique and ambitious project to reclaim history from the ravages of time. 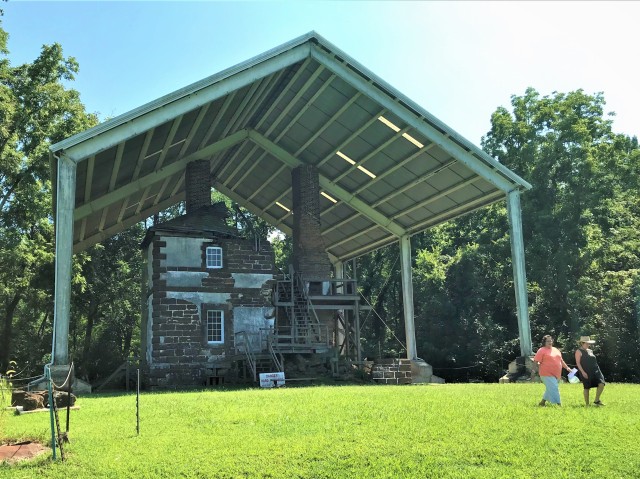 In 1940 while the house was intact, the Historic American Buildings Survey produced detailed photography and drawings of the property.

Menokin is a history site unlike any you’ve ever visited. It’s a stabilized ruin of a house built around 1769 for Francis Lightfoot Lee, a signer of the Declaration of Independence, and his wife, Rebecca Tayloe. The house was never modernized (no indoor plumbing or electricity) and sat abandoned from the 1960s through the 1990s. Vandals and curious children over the years explored and snatched some of its architectural treasures. Those who could find it, for the forest had worked hard to claim it — it became so overgrown that one could walk within fifty yards of it and not even see it. The structure began collapsing in on itself. 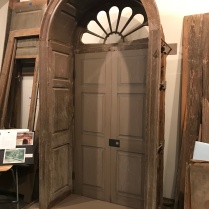 In 1995 the Menokin Foundation acquired the property and began to stabilize the building. They added a roof and shored up some of the precarious walls. They also identified a cache of original materials that had been stripped from the house over the years and protected for the future. Visitors to the visitor center at Menokin usually get a look into the conservation lab. The lab is filled with treasures such as the front door pediment, fireplace mantels, and doors to rooms throughout the house. The doorknobs themselves tell a story of the progression of time and represent a variety of styles. 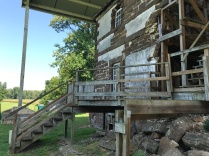 The main draw for most people is the house site. Visitors are welcome to go on hard-hat tours of the ruins with trained guides who are happy to describe the future vision. The foundation is actively fundraising for a series of phases that will ensure preservation. The ruins reveal layers of construction and offer many different angles on building practices in the 18th century. The house’s builders used iron-infused sandstone quarried nearby, and other local materials, many acquired on the property.  It is a powerful connection to the past. The fingerprints of enslaved workers who formed the bricks and mixed the hand-crushed oyster shells into mortar are visible upon close inspection.

The Foundation’s goal is to eventually interpret the entire site, including remains of outbuildings and the site of enslaved workers’ cabins. These have been located. The vestiges of formal terraced gardens and tobacco rolling roads lead to Menokin landing on Cat Point Creek, a good put-in spot for kayakers and canoers . Native American history is also an important part of the land’s story. The site was home to the Rappahannock Indians, who Captain John Smith met in 1608. They called the place Menokin.

The long-range vision is to use modern building practices to preserve and stabilize the structure and incorporate modern technology to help bring the property to life. It will not be restored. The site will be a work in progress for a long time.

Aside from preservation, Menokin faces several tourism-related challenges: it is remote (though not far from Tappahannock, VA), its original owners are not well-known to most Americans (even though Francis Lightfoot Lee was a signer of the Declaration of Independence and the Articles of Confederation), and at present, it requires a vivid imagination to picture the site in its original glory. But for a glimpse behind-the-scenes at how historians and archaeologists and conservationists work to understand the past, there are few places as interesting as Menokin.

Take a detour off of I-95 sometime and explore this fascinating area.

One of the Best Historic Houses –  Drayton Hall in South Carolina

Author, public historian, and consultant. Author site: timgrove.net - My fifth book, Star Spangled: The Story of a Flag, a Battle, and the American Anthem, was published in May 2020. Consulting site: grovehistoryconsulting.com I specialize in exhibition development, interpretive planning, education strategy, and history relevance. I'm passionate about helping history organizations of all sizes and kinds make history more relevant for their communities and the people they engage with. I'm happy to consider many types of writing projects for informal learning organizations. Reach me at tim@grovehistoryconsulting.com or authortimgrove@gmail.com
View all posts by Tim →
This entry was posted in 17th century, 18th century, American Revolution, house, Native American and tagged historic preservation, Menokin, VA. Bookmark the permalink.