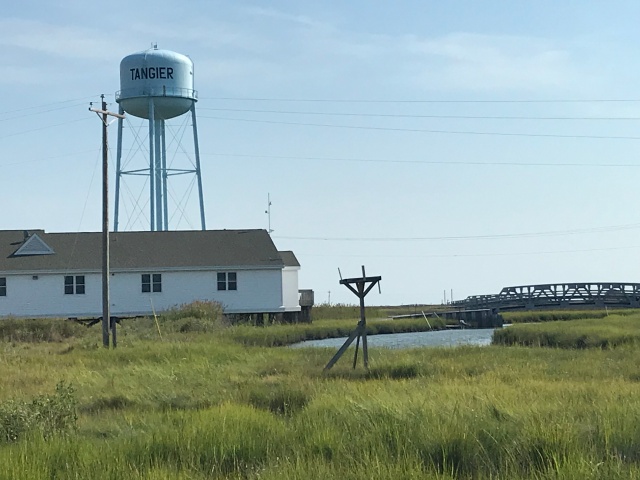 Perhaps you’ve heard of Tangier Island since it has been in news stories about global warming.  The tiny dot of land in the Chesapeake Bay, approximately 12 miles from the mainland, is only 4 feet above sea level.  Its area has been eroding over the decades (67% reduction!) and today it is only 1.5 miles by 1.5 miles or so, an easy 15-minute drive around the perimeter on a golf cart!

I wanted to visit Tangier because I’ve been writing a book about the Battle of Baltimore and the Star-Spangled Banner. Tangier was a British base during the War of 1812 and became the site of Fort Albion.

The British commander in the Chesapeake, Rear Admiral George Cockburn,  had been instructed to: “Find and get possession of some convenient island or point within the Chesapeake… which might serve as a place of refuge for the negro slaves from the surrounding shores.”

His superior, Vice Admiral Sir Alexander Cochrane, had issued a proclamation in April 1814 announcing that escaped slaves were welcome with the British and promised them freedom and resettlement and, for fit, young men, an option of military service. This was not a humanitarian mission, they saw an opportunity to bolster their fighting forces. They formed the Colonial Marines, a regiment that would see battle at Washington, D.C., Baltimore and other sites. Four Colonial Marines were killed during the Battle of Baltimore. 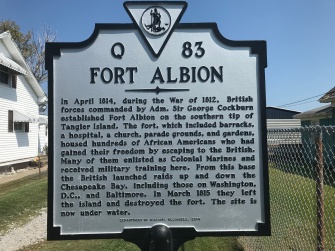 Cockburn built a fort named for his flagship and the ancient name for England, Fort Albion. The community eventually included barracks, a church, a hospital, and houses with gardens. It became a temporary home for almost one thousand former enslaved people.

While I’d read that the site of Fort Albion is under water, I was curious to see the community and to find out if there are tangible remnants of the story. The island’s human history began with native groups, specifically the Pocomoke Indians. Its European history began with the arrival of Captain John Smith in 1608, a year after Jamestown was settled. The first settlers came around 1686. Many of today’s inhabitants trace their roots to settlers from the Cornwall region in England. Their distinct dialect fascinates linguists and is unlike anything I’d ever heard. I’ve walked across Cornwall, but it’s not quite the same accent as I heard there.

A small museum on the island does tell the story of the British occupation. I’m not sure how many settlers were on the island in 1814, but the British made themselves at home and built shelters for the refugees who escaped from the surrounding plantations. From Tangier, the Colonial Marines participated in a number of military engagements and impressed the British military leaders, who had low expectations at the start. With the signing of the Treaty of Ghent in 1815, the War of 1812 officially ended and the British evacuated the island, taking along the many refugees, who they sent to other British colonies such as Nova Scotia and Bermuda. Many of the Colonial Marines and their families ended up in Trinidad, where they settled into agricultural communities in their former divisions. They proudly identified as Americans and called themselves the “Merikans.” 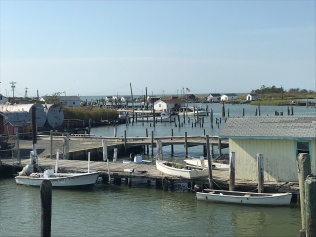 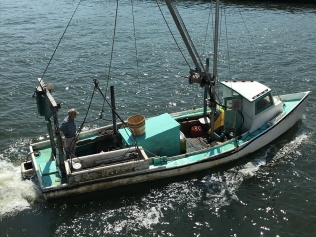 Today, Tangier continues to scrape its existence from the surrounding bay, with industry focused on oysters and crabs. While there is nothing to see from the War of 1812 chapter in its history, the island is worth a visit to get a glimpse of a culture that has survived for hundreds of years in this remote post in middle of the glimmering bay.

My book Star-Spangled: The Story of a Flag, a Battle, and the American Anthem will be published next year by Abrams Books for Young Readers

A Historic Inn on the Eastern Shore

Author, public historian, and consultant. Author site: timgrove.net - My fifth book, Star Spangled: The Story of a Flag, a Battle, and the American Anthem, was published in May 2020. Consulting site: grovehistoryconsulting.com I specialize in exhibition development, interpretive planning, education strategy, and history relevance. I'm passionate about helping history organizations of all sizes and kinds make history more relevant for their communities and the people they engage with. I'm happy to consider many types of writing projects for informal learning organizations. Reach me at tim@grovehistoryconsulting.com or authortimgrove@gmail.com
View all posts by Tim →
This entry was posted in 19th century, military and tagged Colonial Marines, Fort albion, tangier island, VA, War of 1812. Bookmark the permalink.