Bits from the books… impress your friends at holiday parties with fun bits of history trivia –  there is plenty more in my books. Here are 11 favorites.

1 Top General of the American Revolution, First President of the United States, Father of his country… Chief mule man? George Washington, farmer, was an avid 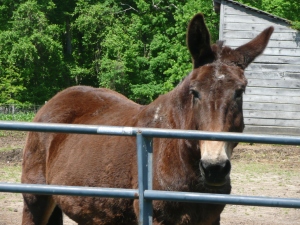 mule breeder who once sent his donkey Royal Gift (a present from King of Spain) on a stud tour throughout the South. Some historians credit the popularity of mules in American agriculture to Washington’s avid promotion of mules. [GM]  Read more…

2  Sacagawea, the Indian woman who accompanied the Lewis and Clark expedition from present-day North Dakota to the Pacific coast, almost died on the expedition. The healing waters from a sulpher spring near present-day Great Falls, Montana, helped her recover from illness. William Clark, especially, became quite fond of her and her baby, Baptiste, who he called Pomp. After the expedition, he wrote to her husband, who had been one of the expedition’s translators, “your woman…deserved a greater reward for her attention and services on that route than we had in our power to give her.”  [GM]

3  During President Lincoln’s second inaugural ball, held in today’s Smithsonian American Art Museum, there was a mad rush on the 250-foot long buffet table which resulted in utter chaos and food smeared everywhere.  There were an estimated four thousand people in attendance. The New York Times reported the following day that “In less than an hour the table was a wreck…positively frightful to behold.” [GM] 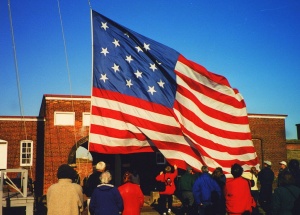 4    Mary Pickersgill, the woman who sewed the Star-Spangled Banner flag, subject of America’s national anthem, received $405.90 for her efforts. Born in Philadelphia, Mary came from a family of seamstresses and no doubt her family was acquainted with a more well-known seamstress, Betsy Ross. [GM]  Read more…

5  An Englishman named Thomas Stevens set out in 1884 from San Francisco to ride a highwheel bicycle around the world. He was the only person to achieve this feat.  He managed to avoid breaking any bones on the crazy trip, despite flying over the handlebars on many occasions. [GM]  Read more…

6  Charles Lindbergh was a meticulous packer. His wife, Anne, wrote that her husband “added and subtracted endlessly from lists.” Because he tried to anticipate every kind of emergency, he carried a sled on one his flights over Greenland. He also took along a new invention called an Armbrust Cup designed to collect condensation from the wearer’s breath in case of lack of water. [GM]  Read more…

7  The world of 1924 was so gender segregated that the U.S. army crews that were first to fly around the world were three months into their flight before they sat down to a dinner table with women, in Karachi, India (now Pakistan). [FF]

8  The world fliers arrived in Paris on Bastille Day. They were greeted by thousands of well wishers. That night their hosts took them to a famous Paris cabaret and ushered them to special seats. They were so exhausted that when the lights dimmed they promptly fell asleep. Once in their hotel, they hung a sign on their room door, “Please do not wake us until nine o’clock tomorrow morning unless this hotel is on fire and not even then, unless the firemen have given up all hope.”  [FF]

9  The 1924 first flight around the world broke army regulations by hauling a reporter who begged to go along on a leg of the trip.  Linton Wells, the Associated Press reporter, lost his job as a result of this. The army fliers who allowed him into their airplane later regretted it because they were “jammed into the cockpit like a pair of Siamese twins and during the six hours and thirty minutes’ flight to Allahabad neither of us could move an inch,” Wells wrote. [FF] 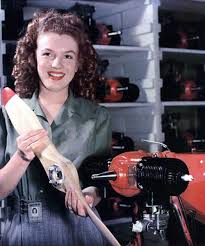 10  Superstar actress Marilyn Monroe was “discovered” by an Army photographer during World War II while working in a drone factory. He was doing a photo shoot about women working for the war effort. Enamored with her beauty, he suggested she go to a modeling agency. The photographer’s commanding officer who recommended he go to the factory was a man named Ronald Reagan. [MF]

11  Let me bust a big myth…Eli Whitney, the famous American inventor, did not invent the cotton gin… What?  Every American student learns this “fact.” He invented a type of cotton gin. Cotton gins had been in use in some form or other since the first century. [GM]

GM – A Grizzly in the Mail and Other Adventures in American History
FF – First Flight Around the World: The Adventures of the American Fliers Who Won the Race
MF – Milestones of Flight: From Hot-Air Balloons to SpaceShipOne  (to be published in June 2o16)

Check out my books at Timgrove.net/books

Author, public historian, and consultant. Author site: timgrove.net - My fifth book, Star Spangled: The Story of a Flag, a Battle, and the American Anthem, was published in May 2020. Consulting site: grovehistoryconsulting.com I specialize in exhibition development, interpretive planning, education strategy, and history relevance. I'm passionate about helping history organizations of all sizes and kinds make history more relevant for their communities and the people they engage with. I'm happy to consider many types of writing projects for informal learning organizations. Reach me at tim@grovehistoryconsulting.com or authortimgrove@gmail.com
View all posts by Tim →
This entry was posted in 18th century, 19th century, 20th century and tagged books, First Flight Around World, Grizzly in the Mail, history. Bookmark the permalink.