Nineteenth century author Sarah Orne Jewett wrote about visiting the home of the Brontë sisters in England: “Nothing you ever read about them can make you know them until you go there. Never mind people who tell you there is nothing to see in the place where people lived who interest you. You always find something of what made them the souls they were. And at any rate, you see their sky and their earth.”

More recently, actress Sally Field, who plays Mary Todd Lincoln in the current film Lincoln, visited Mary’s family’s house in Lexington, Kentucky. “What I wanted to really do was be inside of her house,” Field said by phone last week. “I know what an important place that was for her in studying her, and I really wanted to step inside the house and look at all of that and have the feeling of space.

I had seen pictures of what it looked like in those days before, before there were like parking lots and things connected to it, so that I could have a feeling of where she came from. It’s important in understanding her makeup as a person that you take a look at her home.”

The homes of famous people also hold an intrinsic power, an almost palpable nearness to history. At Susan B. Anthony’s restored house in Rochester, New York, one of the staff members told me of a visitor who made such a strong emotional connection to the place that she burst into tears on the sidewalk in front of the house when her tour guide told her that Miss Anthony had walked on those same bricks.

Admittedly, I’m not a huge fan of Mrs. Lincoln, but when I visited Lexington last summer I was a little disappointed that I arrived after the house had closed for the day. My friend and I had to settle for reading the interpretive panels in the garden. This site is the first historic site restored to honor a First Lady and opened to the public in 1977. 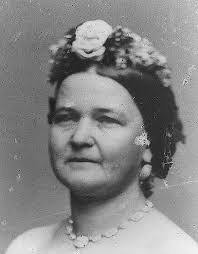 Mary moved to this house with her family when she was fourteen and lived there for the next seven years when she wasn’t at school. From this home, she moved to Springfield, Illinois to live with her sister. There, of course, she met her future husband.

This home was where the teenaged Mary learned how to be a lady and rubbed shoulders with the influential people of this cosmopolitan city. One of those people was Henry Clay who lived less than two miles away and was a family friend. Supposedly he once promised Mary that she would be one of his first guests in Washington when he became President.

Presidential homes are scattered around the United States, but what other sites honor a First Lady? In Hyde Park, New York, you can visit Eleanor’s Roosevelt’s home during her later years. Val-Kill, two miles down the road from the main Roosevelt house, was originally a furniture factory and later a Roosevelt family retreat. But Eleanor converted it into a cottage around 1938 and lived there after her husband’s death.

The Harry S Truman home in Independence, Missouri, is a fascinating look at this rather modest family. The house originally belonged to his wife Bess’s parents, and Trumans bought it when Bess’s mother died. So in some ways it is Bess’s home.

First Ladies National Historic Site, opened in 2000, is located in Canton, Ohio. It honors all of America’s first ladies and includes the Ida Saxton McKinley home (wife of the 25th US President).

Are there other historic homes related specifically to First Ladies?

The other Lincoln memorial

Author, public historian, and consultant. Author site: timgrove.net - My fifth book, Star Spangled: The Story of a Flag, a Battle, and the American Anthem, was published in May 2020. Consulting site: grovehistoryconsulting.com I specialize in exhibition development, interpretive planning, education strategy, and history relevance. I'm passionate about helping history organizations of all sizes and kinds make history more relevant for their communities and the people they engage with. I'm happy to consider many types of writing projects for informal learning organizations. Reach me at tim@grovehistoryconsulting.com or authortimgrove@gmail.com
View all posts by Tim →
This entry was posted in 19th century, house, President and tagged KY, Lincoln, Roosevelt, Truman. Bookmark the permalink.