Best historic bike trail in the US?

One of the most historic bike trails in the United States has got to be the 54-mile Capital Trail that runs from Richmond to Jamestown in Virginia, current capital city to first capital and first permanent English settlement in America. I conquered the trail in about 5 hours recently, not counting time spent reading historical markers. Oh, my friend and I stopped to read the first few. Then we realized that if we stopped to read every one, we would double the trip. It’s not an exaggeration to estimate at least 100 markers stand along the trail. This area is layered with history, from Native American settlements to the American Revolution, the War of 1812, the Civil War, and into the twentieth century. I tried to practice speed reading as I whizzed by them.

I’d imagined a ride along the James River, past the many elegant plantation homes that line the river: at least eight, two with ties to U.S. presidents including Sherwood Forest, home of 10th president John Tyler and Berkeley, the birthplace of 9th president William Henry Harrison and his grandfather Benjamin Harrison, a signer of the Declaration. Then, there is Westover, considered one of the finest Georgian homes in the country, an estate that was occupied by British troops under traitor Benedict Arnold during the War of Independence and by Union troops during the Civil War.

The reality is that the trail does parallel the river, but inland a few miles. The water is only in view at Richmond and when crossing a high bridge over the Chickahominy River. The paved path follows state route 5 and except for a few spots, the sound of traffic is always in the background. And, unfortunately, only one plantation home is visible from the trail, the others are set back from the trail or sit by the river. 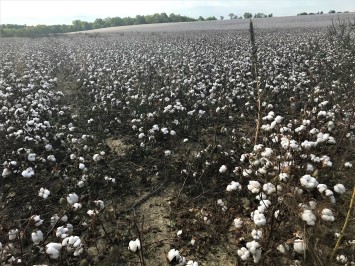 Nevertheless, I enjoyed the ride. While my friend and I had not wanted to take many breaks, we made three memorable stops along the way. First, we rounded a corner and came to an abrupt stop to marvel at the beauty of a cotton field ready for harvest, the fluffy whiteness spreading  as far as the eye could see. While I’d seen cotton fields before, I’d never seen such a large field. I have done quite a bit of research about the history of cotton production and was thrilled to see this stunning sight. Of course, historically, cotton was not the prime crop here, tobacco was. This land was once filled with acres of “Virginia’s gold” that brought great riches to the colony’s wealthiest families on the backs of an enslaved labor force brought from Africa.

The second stop was Westover Church, one of the oldest Anglican churches in Virginia built in 1730 and still an active congregation. The simple brick building is surrounded by those standard Virginia botanical features of boxwood and magnolias. No doubt over almost three centuries, a number of illustrious Virginians worshiped here.

The final stop was Charles City County’s historic courthouse, built around 1730 and claiming to be the third oldest existing courthouse in the nation (a claim that would be pretty hard to substantiate). The complex of several brick building sits at a crossroads that saw troops from both sides in several wars marching through.  Simcoe’s British cavalry attacked a patriot militia in a tavern here during the Revolution and Grant’s Union army troops came by in 1864.  A Confederate monument, dedicated in 1900, stands as a reminder to a heritage of sacrifice. 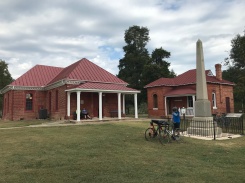 I was happy to see that the county’s complex history continues to be told. A newer historical marker tells of a later story. It commemorates the lynching of Isaac Brandon nearby in 1892. 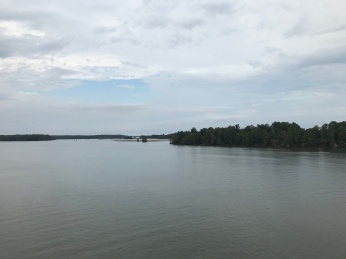 My friend and I had chosen to ride west to east, against the progression of historic settlement, in hopes that the trail would be somewhat more downhill since it follows the river flowing toward the Chesapeake Bay. We neared Williamsburg, Virginia’s colonial capital, home of the restored outdoor museum Colonial Williamsburg. Suddenly the trees opened up to a wide expanse of water, the Chickahominy River.  We crossed the high bridge and were in the home stretch.

We had parked a car in the Jamestown Settlement parking lot, conveniently located at the end of the trail. Our trip through centuries of Virginia history was over, for now. I hope to ride the trail again, in a different season, and will practice my speed reading so I can read more historical markers along the way.

Jamestown’s foothold in the new world

A place of history inspiration – Williamsburg

Author, public historian, and consultant. Author site: timgrove.net - My fifth book, Star Spangled: The Story of a Flag, a Battle, and the American Anthem, was published in May 2020. Consulting site: grovehistoryconsulting.com I specialize in exhibition development, interpretive planning, education strategy, and history relevance. I'm passionate about helping history organizations of all sizes and kinds make history more relevant for their communities and the people they engage with. I'm happy to consider many types of writing projects for informal learning organizations. Reach me at tim@grovehistoryconsulting.com or authortimgrove@gmail.com
View all posts by Tim →
This entry was posted in 18th century, 19th century, agricultural, American Revolution, city/town, Civil War, house, military, President, religion and tagged bike trail, capital trail', Civil War, cotton, plantations, VA. Bookmark the permalink.

2 Responses to Best historic bike trail in the US?